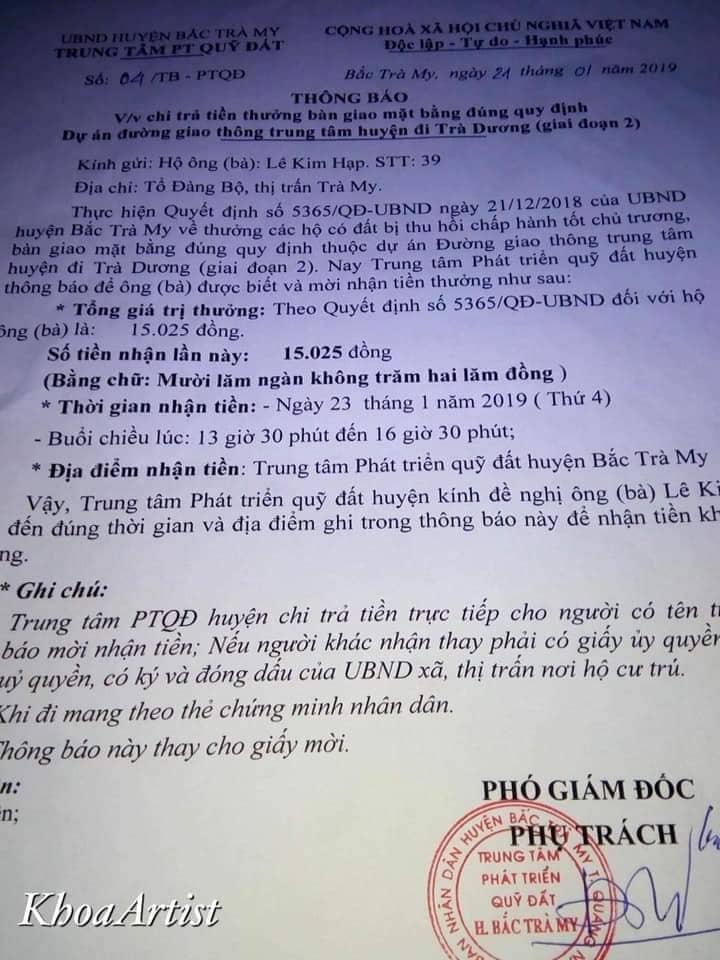 On January 22, on social networking, there was notice No. 4 from the Bac Tra My District Development Fund Center, Quang Nam about bonus payments for handing over land in accordance with the regulations of the central district road project. go to the Tra Duong commune, phase 2 with a number of "prizes" … more than VND 15,000.

According to the announcement from Dana Tra My District for Land Development, Le Kim Hap (Party Committee, Tra My town, Bac Tra My District) was awarded the VND 15,025 prize. The time to receive the award was the afternoon of January 23, 2019. The notice was issued by Mr. Dang Cong Tu who is in charge of the Center for Development of the Land Fund of the Bac Tra My District.

With the announcement of this bonus of more than 15,000 VND, public opinion buzzed and said that this "big" bonus was only available in Quang Nam.

After the announcement was posted on social networks, netizens came to the gift recipient: "bring three bags of bags with you"; "enough to buy a liter of wine" or "receive this big bonus for eating a popular bowl of pho to make up for 5,000". Someone "worries" how small amounts will pay …

Faced with the amount of this strange bonus to the press, Mr. Dang Cong Tu – who was in charge of the Bac Tra My District Land Fund Development Center, said that the announcement of 15,000 VND bonuses was given to Mr. Le Kim Hap is real, not a joke. downgraded.