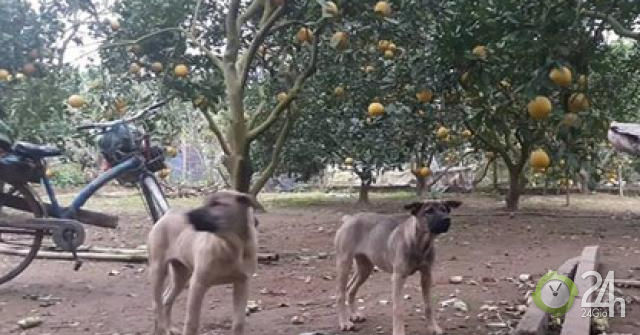 Pomelo Dien is a famous specialty from North land for a long time. Grapefruit has aromatic shells, lots of water, sweet, yellow, and crispy pomelo, so many people like it.

In the days adjacent to Tet Holidays, the price of pomelo in the garden ranges from 50-70 thousand VND / fruit and is always in a "burning item". This is also the reason why pomelo farmers lose sleep because of pest control.

This is a grapefruit robbery that is so large that people in the neighborhood almost remember it because it happened in Mr. Pomelo's garden. Nguyen Dac Duong, former Deputy Chairperson of the Phuc Dien Environmental Committee, Bac Tu Liem District, Hanoi in December 2016. That day, taking advantage of the darkness, Pomelo gardens did not have people to see, thieves slipped into the garden to steal more than 400 pieces. Duong recounted: "It was Tet days, the house had a job so after I had dinner, I could go to the garden. Suspicion came to the stolen place to more than half the park. It is estimated that the number of pomelos stolen is around 400, the loss is more than ten million. At that time, there were only 8pm, the road still had people passing by and they didn't expect them to be so careless. "

Another case in Bangsal Phuc Dien was also stolen and stole more than 300 pieces in November 2017. According to park owners, the reason why grapefruit gardens were stolen was because the gardens in the middle of the fields were passed by several people, there were no guard dogs, no guards . Thieves go to the garden just to pick big and beautiful fruits, to throw away the small and evil fruits that are left behind.

According to the farmers who grow pomelo in the village of Duc Dien, the Phuc Dien ward, from October and November, when the pomelo can be eaten, thieves also start operating. Thieves often work at dusk when people come to eat rice and at dawn, when people sleep the most. The gardens are located right outside the road, far from the most vulnerable people.

"When they detect theft, people only dare to exhale to stop them and leave without daring to return because they are afraid of stealing and carrying their weapons, which endangers their lives. Several years ago, a man in the Dam village (Tay Tuu ward, Bac Tu Liem district, Hanoi) was robbed to death for fighting, recapturing a stolen pomelo "- said one resident.

To combat theft, gardeners in the Phu Dien ward have invested in concrete pillars, 2-2.5m high barbed wire fences. There are houses carefully after the barbed wire fence is surrounded by pineapple canvas to steal without looking at the park. For more conditional homes, install the camera for convenient remote monitoring. 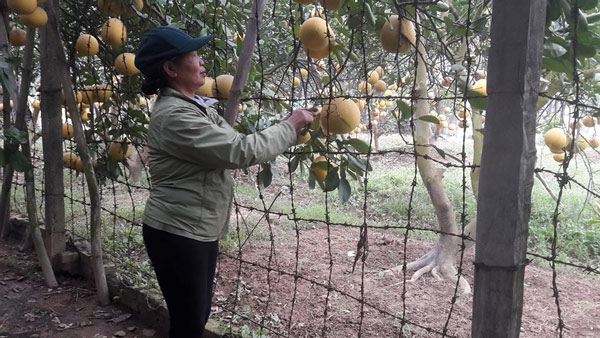 This year, the Pomelo garden by Mrs. Le Thi Tam (Duc Dien village) with around 100 originals, for around ten thousand. These are various Pomelo Dien necks, good quality, beautiful code, so starting in November, Pomelo Gardens at home have visitors who come to order early. Afraid of stealing attacks, he invested tens of millions of VND to build barbed wire fences, light electricity, build sleeping huts and release guard dogs.

"The park is almost 3,000 m2, I built a barbed wire fence around it, whichever part is close to a big road, the barbed wire fence will be built higher. In addition, my husband and I also have to pull electricity to light up all night to steal people and I don't dare to go in. Both the father and son keep taking turns, watching all night all day. 20 dogs are also released to guard the garden. Thanks to very strict attention, this year my garden has not been stolen "- said Tam.

Nearby is the park of Pak Nguyen Van Dung, three large dogs have been released by him to lurk around the park. As soon as the guests arrived at the gate, the dogs barked loudly, running around to make guests panic. "There is a house here that was never stolen. So options like dog dogs, fence construction, electric lighting, tower construction … are fully used. Thanks to that, the number of thefts also decreased a lot, "- Pak Dung said.