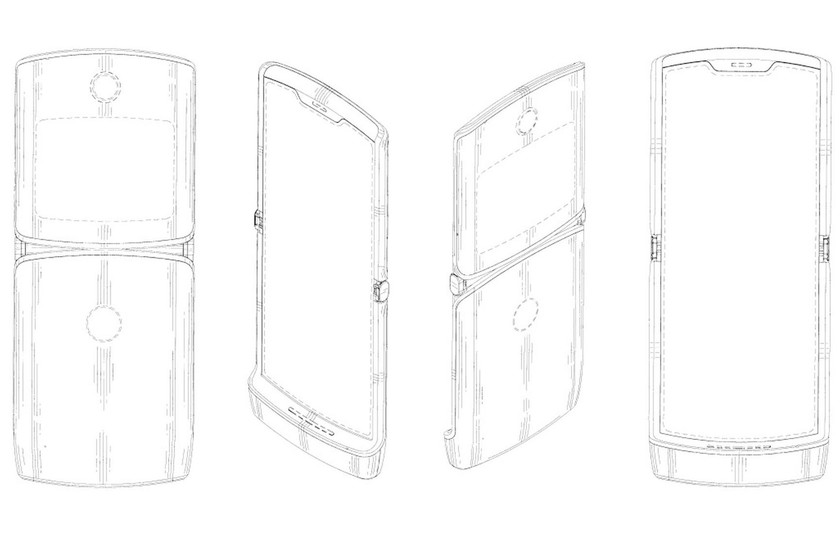 A few days ago, The Wall Street Journal dropped a bomb to ensure that Lenovo was preparing the return of the legendary Motorola RAZR, only that will adapt to the new age to become a smartphone with a folding screen, but it will retain most of the famous V3 designs.

After this first breakdown, today the 91Mobiles website discovered a patent filed by Lenovo before the World Intellectual Property Organization on December 17, which allows us to see for the first time what this new look will look like. Motorola RAZR and that gives us clues about what we might expect.

This patent allows us to see a number of sketches from different angles, where it is strangely not mentioned about the RAZR brand, however, the design is easily recognizable. The first thing that stands out is that inside there will be one screen along the device, which will replace the old keyboard, but the most important thing is that it will become folding panel that will hang up to hide your screen.

We can also see it outside we will have a second smaller screen, maybe for notifications and some basic functions. Similarly, we have a return chin characteristic at the bottom, which will be thicker than all the devices used and will function to add certain components and thus do not add thickness to other cellphone parts.

Last month, during the interview designer Paul Pierce, who co-designed the RAZR V3, mentioned that currently there is an opportunity to revive the legendary Motorola mobile, it's just that it shouldn't be done with tricks or with an advertising strategy, but rather that someone must find a way to come back as a breakthrough in innovation.

"I think people are anxious and remember the RAZR, how it was opened, how it sounded, and the feelings it conveyed, where is it today? It seems we have a chance here, so we try to understand what we can do to revive some that, but we have to do it in a way that fundamentally offers an extraordinary experience. "

According to the WSJ, this Motorola RAZR 2019 It will arrive sooner than we expected, because everything points to the announcement during February. Of course, we will talk about exclusive devices, around $ 1,500 and only about 200,000 units will be produced. In fact, it is said that it will not leave the United States to become an exclusive Verizon operator.