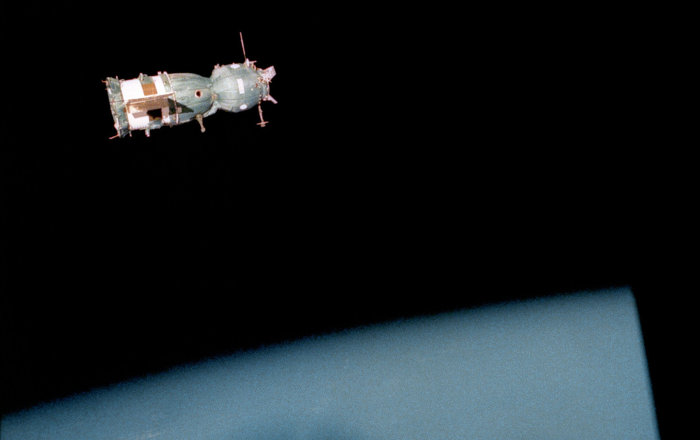 MOSCOW (Sputnik) – Head of the Russian Roscosmos State Space Agency Dmitry Rogozin said that NASA had asked Roscosmos to make a moon version of the Soyuz spacecraft as a backup manned space transportation system for flights to the Moon.

A senior Russian space industry source told Sputnik that Moscow would develop a version of Soyuz that was being directed at its own expense, and expected no funding from NASA.

"NASA will not pay, it is planned to do all work at its own expense," said the source.

To ensure the ability of the Soyuz spacecraft to fly to the Moon, a new acceleration and thermal protection unit that will allow the ship to return to Earth's atmosphere at a second cosmic speed (11.2 kilometers per second, or 6.95 miles per second) is needed.

Documents from the Russian RSC Energia spacecraft manufacturer available for Sputnik show that mounting a star sensor, manual control devices, evaporative systems, auxiliary engines and oxygen cylinders is needed to ensure the flight of the spacecraft to the Moon.

In 2017, former head of RSC Energia, Vladimir Solntsev, said that some people urged corporations to fly around the Moon and were ready to pay $ 120 million for tickets. He said that such flights might occur in 2021-2022. In this case, the Soyuz modernization for flights around the Moon requires $ 500 million.

On January 17, Rogozin announced that RSC Energia could make a new Federation spacecraft and, at the same time, upgrade the Soyuz spacecraft to flights to the Moon.

In addition, he said that Roscosmos hoped for a new negotiating position with NASA at the Near-Moon station due to the commencement of upgrading of Soyuz spacecraft for flights to the Moon.