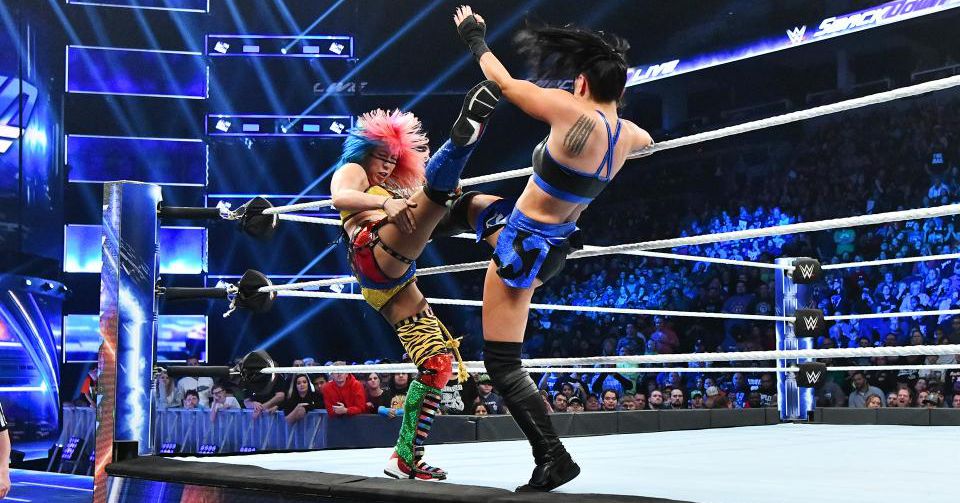 I haven't been used to watching SmackDown since I started to review Raw. It's just … a lot of wrestling, huh? So, ten minutes to Smackdown, two things surprised me.

First, babyface General Manager is competent like manna from heaven. Oh my goodness, Paige, I need you for so long. Second? I haven't heard someone in Raw get a Becky Lynch reaction for some time.

Lynch talked about how annoying it was to see someone in his shadow – and me loved the phrase, in a way – to fight Ronda Rousey as his successor at Survivor Series. And that of course brings the woman in question: Charlotte Flair.

Yes, I was devastated for the return of Genetically Superior Charlotte. I have been a big fan of that mentality since the days of the NXT and it is a perfect overthrow for human-made Lynch. The two demon spines were traded for a moment when Paige beamed with pride.

And return to Paige for a while; he is the fulcrum of the whole storyline, the catalyst for the entire division. Paige offered a title match for Charlotte in TLC because his passion and drive to match Becky was very clear. This time? TLC match. Let's go crazy.

The rest of the locker room takes issue with Paige letting Charlotte cut to the front of the line, though. They show their complaints and get this: Paige really listens to talent and gives them a chance to prove their mistakes! I know! I don't believe too!

Paige ordered a royal battle on the main event where the winners will join in the TLC match. And for a while, I'm sure that might be Mandy Rose. He has been talked about a lot and is clearly the focal point of the opening segment.

But no, how did you get past Asuka when she got the reaction she got tonight? It's the best SmackDown and I'm sure that this match must be the main TLC event.

Now to be fair, there is a big gap between these three names and the rest from the division. WWE might have to work on it. But with the Royal Rumble in just two months, I can't be too critical.

Oh my how history repeats itself.

Jeff Hardy received extraordinary respect at this event, celebrating 20 years of death-defying moments and general madness. Or as the Hardy children said on Tuesday.

And it's neat! The production crew is filled with videos of this kind and the crowd is very well involved. I watched with a warm, delicate heart as Jeff truly underlined his adventures in the wrestling industry.

Samoa Joe crashes into a party and I swear to the good that he is the most ferocious male wrestler on the WWE with a microphone in his hand. Instead of celebrating Jeff's ability to overcome his past problems and find happiness and success, Joe scoffed at the man for his bad nature and taunted Hardy for his failure.

And of course, he talked about Jeff's history with alcohol and drugs. We have also heard every single point Joe made before from a certain Straight Word Savior. This version of CM Punk and Samoa Joe's version is completely different; while Punk was delusional and perhaps even afraid of what Hardy was fighting for, Joe was only a cruel man who laughed at anyone for being "weak."

Geez, if it's not effective. I hope the match here provides as good as this segment.

The Usos def. The bar – The Big Show turned around once more and this is my surprised face. The match is fun, but it's just your usual tag match affair.

Daniel Bryan doesn't want it – I really foiled the AJ Styles promo tonight. He said that he understood Bryan was doing something evil to win. He can relate to that. But stepping on his face repeatedly after the match? That made Styles upset, and Bryan's explanation didn't help at all.

I like how Styles took a shot at Brock Lesnar, by the way. Bryan missed his assignment, "taking instructions" from Raw and anyone taking pictures in Raw right now is a good guy in my book. But it's AJ because he makes a point of not missing the date, from always be on the show. That disgusted him losing a man who acted like Bryan's acting.

I like how easy this is. I also like how AJ Styles displays disgust. He is really great at that.

Love children Miz and Shane McMahon – Miz killed him. After fighting with New Day – and losing – he immediately confronts Shane to ask why he is not helping. I couldn't help laughing when Miz pushed Shane's confused Best in the World trophy.

Nakamura ambushed Rusev – Okay, this isn't it. If Paige is supposed to be a babyface GM, this kind of thing must be bitten from the start. And frankly? Nakamura and Rusev are too good for this kind of thing. I don't think these kinds of things really attract the attention of many people.

The … College Killer? – Not sure how I feel about Randy Orton right now. Is he experiencing a midlife crisis? Trying to reclaim the Killer Legend's glory days? Orton was horrified to make sure, but I don't think there was enough substance here to get the reaction they expected.

This is like fresh air after decaying through Raw yesterday. Obviously there are some problems, but we can work with this, friends.