The police are raves at Carpetright in Strood Retail Park 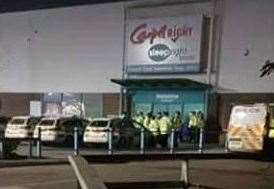 There was a massive police response to a party at Carpetright in Strood Retail Park at 11:30 pm, and a man was arrested.

Up to 10 police vehicles are parked outside the store while ravers party.

After leaving the store, young people were seen walking along Station Road, Strood, and outside the Rochester train station.

Police confirmed a 39-year-old man from Ashford was arrested on charges of conspiring to violate public order and supplying psychoactive substances (nitrous oxide).

"It was determined that music events that were allegedly not licensed were being held in an unused warehouse with a large number of people present.

WATCH: The police were at the scene this morning

"Officers remain on site to prevent possible violations of peace, ensure public safety and identify if criminal violations have been committed.

"The question is ongoing."

This morning, police officers were at the scene of their investigation.

The shelled shop is full of empty bottles and there is drug equipment outside.

Read more: All the latest news from Medway