Home / unitedkingdom / Sturgeon: Scotland can be a bridge between UK and EU

Sturgeon: Scotland can be a bridge between UK and EU 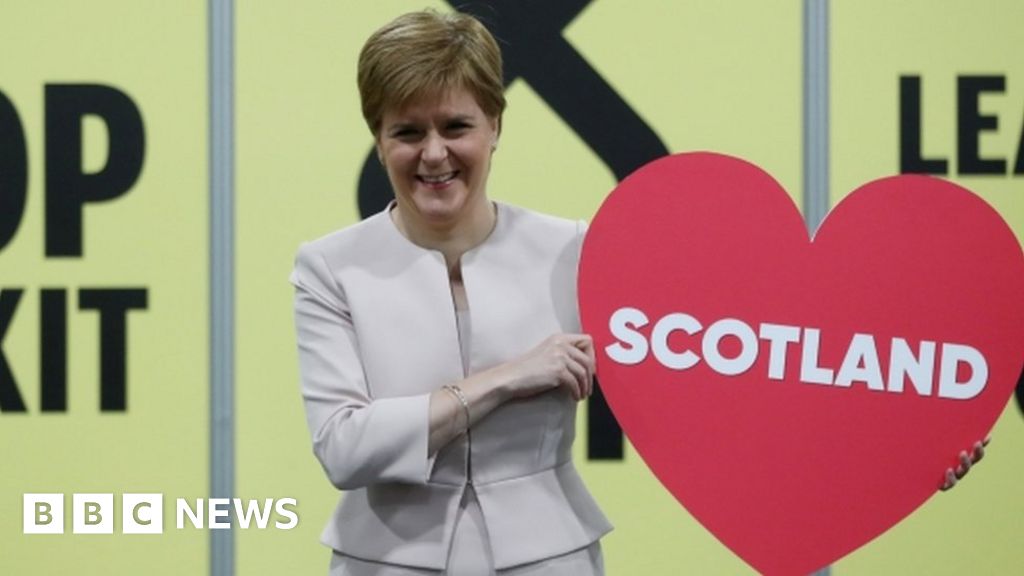 An independent Scotland could act as a "bridge between the EU and the UK" and be a "magnet for global investment", Nicola Sturgeon is to tell SNP members.

The first minister is to close his party's conference in Aberdeen with a speech on Brexit and independence.

She will say that being inside the EU's single market and close to the UK would give Scotland a "unique advantage".

And she is set to unveil the first SNP policy pledge of the 2021 election campaign, to scrap social care charges.

She said she was aiming to be re-elected as first minister in 2021, and said charges for people who are cared for in their own homes would be phased out across the terms of parliament if she was.

The conference in Aberdeen has focused on the core of the party's platform for the coming UK general election – opposition to Brexit and support for a new referendum on independence.

Ms Sturgeon will tell party members that "we must reject a post-Brexit race to the bottom and embrace instead of a race to join the top tier of independent nations".

And she will say that "as an independent European country", Scotland would have "a unique advantage".

She is expected to say: "We will be in the EU single market and also the closest neighbor to our friends in the rest of the UK – a bridge between the EU and the UK, making our country a magnet for global investment.

"That's what I call the best of both worlds."

Earlier in the conference, Brexit Secretary Mike Russell told delegates that the Scottish government was "intensely examining" EU accession rules with a view to reapplying for membership after winning independence.

Ms. Sturgeon has been questioned several times about whether Scotland is inside the EU's single market, while the remaining UK is not, would require a hard border between the two.

She told BBC Breakfast on Monday that "it would be my intention that that doesn't happen".

She said: "Before Scotland takes that decision on independence we would set out how we intend to ensure that trade flows between Scotland the rest of the UK and vice versa would continue, because it's important that they do.

"Obviously the detail of that depends on the final relationship between the UK and the EU, we don't know what that's going to be yet.

"I will, as the independence campaign in 2014, put forward all these facts and arguments so people in Scotland can make an informed choice about their future."

On Sunday, delegates unanimously voted through a motion supporting the decriminalization of drugs, making it officially the party's policy should power over the field be devolved.

The conference has also seen a string of party leadership figures dismissed the possibility of a "plan B" route to independence, with attempts to strike a deal with the UK government over a referendum currently deadlocked.

Some activists – including MPs, MSPs and councillors – have suggested that if this situation continues, the party could hold an unauthorized vote or treat an election win as a mandate to start independence negotiations.

An attempt to add a debate on this to the conference agenda was overwhelmingly voted down on Sunday.

On Monday, Deputy First Minister John Swinney told members that only "patient persuasion" was followed by a legally-recognized referendum would secure independence.

Echoing earlier comments by Ms. Sturgeon, he said: "There is no shortcut. There is no magic policy or political wheeze that can change the task ahead of us.

"One by one we must persuade our families, our friends and our neighbors of our cause. One by one. Step by step."