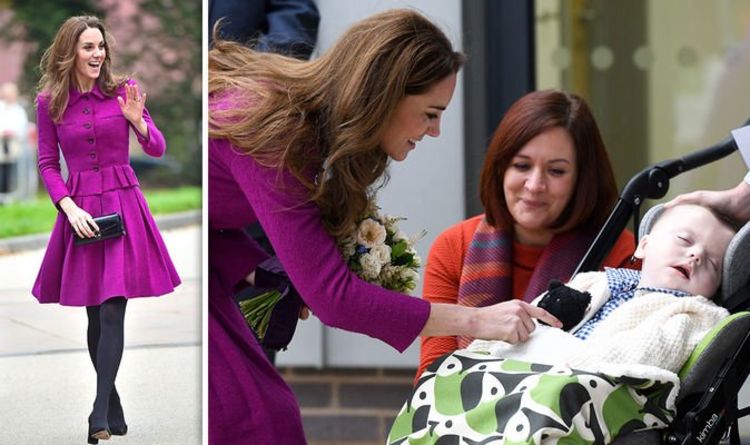 Kate, the Duchess of Cambridge, was welcomed by dozens of schoolchildren who waved paper flags when she arrived to open a new building in Framingham Earl, Norfolk. She wore a stunning purple dress with peplum detailing for the event where she was due to uncover the plague to officially open a new charity center, The Nook on Friday afternoon. Kate, who has been a charity protector since 2012, showed off her maternal side when she stopped to talk to children and their families who would use the new facilities and even revealed Princess Charlotte's favorite hairstyle while chatting honestly with one of the young people women.

Rebecca English from the Daily Mail, who was on the show, said Kate praised one of the girls in her hairstyle.

He said, "I like your plait. My little girl Charlotte likes plait but her hair is only this long so we have to do it at the top. "

Princess Charlotte, four, is the second oldest daughter of Kate and Prince William, with Prince George, six, being the oldest and Prince Louis, one, is the youngest.

Duchess continued to show her motherhood when she met Stanley Harrold outside the hospital, she was three years old and had a rare chromosomal abnormality, Pallister-Killian syndrome.

He arranged to meet more children and families who were supported by East Anglia's Children's Hospices (EACH) when he toured the hospital.

Kate helped launch a £ 10 million Book Nook five years ago to raise funds for a sophisticated children's hospital to replace their old facilities at Quidenham.

He attended the launch of The Nook's appeal in November 2014 and Friday's visit will be exactly two years since the first "grass cutting" on the site.

The new building has a hydrotherapy pool, sensory rooms and family en-suite accommodation.

This charity provides care and support for children with life-threatening conditions and their families in Cambridgeshire, Essex, Norfolk and Suffolk.

Kate will meet children, teenagers and families who take part in arts and crafts activities during her visit before giving a short speech to invited guests.

This is not the first time Kate has worn a striking purple dress, costing £ 2,736, after previously wearing it at the Health Writers conference in 2017 and then again this January when she visited the costume department at the Royal Opera House.

For Friday's visit he paired the dress with Gianvito Rossi's heels for £ 520 and a black Aspinal clutch bag.

Speaking about opening a new site, an EACH spokeswoman said HELLO! magazine: "The Nook is a 21st century building to provide 21st century care, spread across one floor, with more area for clinical care, larger and more complete en-suite bedrooms, special therapy rooms and more .

"This will enable us to fully meet the increasing demand for our services and the changing and more complex needs of those we care for.

"Located in a five-hectare forest location, closer to the county center, hospital and road network, it also means the majority of families and staff will travel shorter distances to receive and provide care."