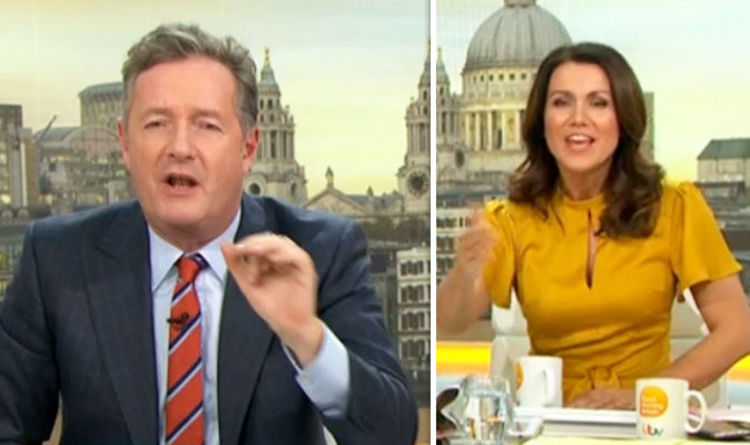 During the entertainment segment, hosted by Richard Arnold, he discussed my last night A Celebrity … Can I Get Out of Here! 2018 Bushtucker Trial, which features lizards and doves.

"Pigeons are displayed in I & Am Celebrity [last night], scary, very frightening for some people, "Richard began to explain

"Actually, I would argue, pigeons and birds in droves, could be even more frightening, of course to Des of course -"

"Well luckily we have several doves in the studio," Richard continued.

"Oh, this is a dove," Charlotte Hawkins commented.

"This is our Trevor handler," Richard introduced, when viewers saw a man carrying two doves into the studio.

"Who will hold a dove?" Trevor asked. "Are you leaving?" He pointed at Piers.

"Just let them fly," said the reporter, but Trevor had another idea and decided to place two doves on Piers' shoulder and head.

"Oh, my days," Susanna joked, while the people watching at home saw Piers sitting upright facing a dove on his head and one on his shoulder.

A split image then appeared on the screen comparing the images of Piers with Brenda Fricker, "dove woman" and everyone in the studio could be heard with a laugh.

While Piers was unhappy with his guests, they suddenly decided it was time to leave and fly away from the presenter in a frenzy.

"They're ruffling me now – oh for God's sake," he continued, trying to tidy up his messy hair.

"Right, can we get rid of the animals."

"Oh, he just peed on him," Charlotte interrupted and pointed at Susanna's paper.

Trevor then tries to regain control of the bird but flies from the table very quickly leaving the presenter to all jump simultaneously.

"No one panics!" Charlotte added.

"You might just want to check your script there, he left a little gift for you Susanna," he joked.

The animal clerk was then seen trying to collect the dove and take it out of the studio, but unfortunately it was far more difficult than it appeared.

In the later scene, viewers see weather reporter Laura Tobin join in shooting and roaming around the studio behind the host.

"Laura, what are you doing?" Susanna asked.

Cameras followed Laura who drove the dove to the back of the studio.

Good Morning English airs weekdays at 6 am at ITV.