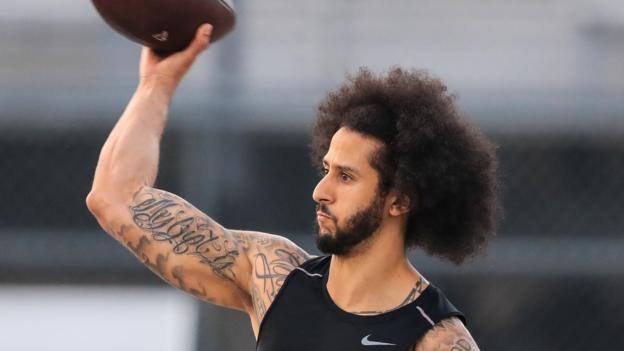 Colin Kaepernick, who was not invited, chose not to attend private training organized by the NFL, instead of holding his own session in high school to allow the media to attend.

He said he wanted "transparency", claiming the NFL was denying media access to a self-planned exercise in Atlanta.

All 32 clubs were invited by the NFL to judge Kaepernick, who last played in 2016, when he began kneeling on the US national anthem in protest against racism.

The NFL said it was "disappointed" the venue changed after 30 minutes' notice.

Representatives from 25 clubs have appeared at the Atlanta Falcons training facility in hopes of meeting the 32-year-old.

"Kaepernick did not appear for 25 NFL teams at the Falcons facility waiting at 3 pm," the league tweeted.

When speaking in the media when his training finished at Charles R Drew High School, in Riverdale, Kaepernick said: "Our biggest thing is to make sure we have transparency in what happens.

"My agent is ready to talk to any team; I will continue to be ready.

"We will let you know if we hear from them. The ball is in their court. We are ready to go."

Kaepernick's choice of place on Saturday is an hour from the scheduled location and the NFL said on Twitter: "Nobody has a head until the NFL sees [Kaepernick] Twitter statement. "

In a lengthy statement, the league said it had made a major effort to work with Kaepernick representatives, adding: "We are disappointed that Colin did not show up for his training.

"Colin's decision has no effect on his status in the league. He remains a free agent without limits who is eligible to sign a contract with any club."

When announcing the change of venue, a statement from a Kaepernick representative said: "From the beginning, Mr Kaepernick requested a legal process and from the start the NFL league office had not provided it.

"Recently, the NFL has demanded that as a prerequisite for training, Mr Kaepernick signed a waiver of unusual obligations that address labor issues and rejects the abandonment of the standard liability from physical injury proposed by Mr Kaepernick's representative."

Kaepernick, who became a free agent after the 2016 season and remained un-signed, also asked that all media be allowed into training to observe and film it, but the NFL refused the request, their statement added.

He filed a complaint against the owner of the NFL in October 2017 after leaving without a signature as a free agent, believing they were conspiring not to hire him due to kneeling protests.

The two parties settled the complaint in February under a confidentiality agreement.