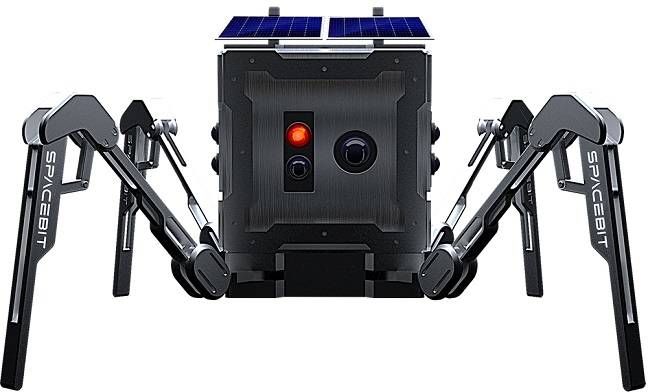 Roundup In a week where the space-faring community said goodbye to death-defying cosmonaut Alexei Leonov, Skyrora upped the ante with its rocket testing, Elon Musk and Jim Bridenstine kissed and made up, and Britain said it would be sending mech-spider nightmare fuel to the moon.

Your worst nightmare? Brit spiderbot * to roam the Moon

Brit startup SpaceBit showed off its Walking Rover robot at London's New Scientist Live show and announced it would be hitching a ride aboard Astrobotic's Peregrine lander in 2021.

"It's going to be quite a spectacle when we land because we're going to have multiple small rovers dropping and rolling or crawling or walking off and taking all kinds of pictures and data," said Astrobotic CEO John Thornton. Thornton's spacecraft is due to be launched on the first ULA Vulcan mission in 2021.

Discussion of lunar exploration with Spacebit CEO and Founder, Pavlo Tanasyuk, and US Astronaut Al Worden, who flew to the moon as part of the Apollo 15 mission, moderated by TV presenters @dallascampbell.#spacebit #spaceexploration #newscientistlive pic.twitter.com/6ot9B8Snkh

The rover itself, which is solar powered and weighs at 1-1.3kg, is expected to be able to scuttle 10 meters from the Peregrine lander and transmits HD video and 3D LIDAR data from its sensors. To further add to the horror, the four-legged robot can also jump.

That solar power will also mean the rover is unlikely to survive the lunar night. A relief, no doubt, for 2024's moon-walkers worried about Opportunity-esque longevity.

Snark aside, the four-legged design has several benefits over traditional wheeled trundlebots, particularly on steep or rocky terrain. It will also put Blighty in an elite club of nations that has built and operated rovers on the Moon.

Edinburgh-based Skyrora has completed the first phase of testing for the 30kN engine destined to power the company's Skylark-L (formerly Skyrora-1 or SK-1) on a suborbital lob in 2020. The testing of the engine, which is an order of magnitude more powerful than the 3.5kN upper stage unit fired at the company's Newquay facility in Cornwall in July, lasted for 30 seconds.

A few more 30-second cycles will be needed as well as full-duration firings before the engine can be signed off to send payloads of up to 100kg on suborbital trajectories.

The company also announced the opening of a "major European test facility" capable of testing engines up to 70kN, but wouldn't disclose where this facility was actually for "commercial reasons".

Rocket Lab sets the date for when the Crow will Fly

Rocket Lab has continued to cheerfully send payloads to orbit aboard its Electron booster from its New Zealand launch complex.

The company has set a date for its next lift-off with a scant three days' notice. The mission, named "As The Crow Flies", has a Not Earlier Than (NET) launch time of 00:00 UTC on 17 October and is the ninth mission for the company's Electron rocket. Founder Peter Beck told The Register to expect some visible changes to the booster from the 10th mission as the company moves towards reusability.

The payload on this mission is a single satellite for California-based Astro Digital. The spacecraft is a Palisade technology demonstration satellite comprising a 16U CubeSat bus with on-board propulsion and Astro Digital's own communication system.

Administrator Bridenstine visited @SpaceX headquarters today to see the progress being made on @Commercial_Crew flights to @Space_Station. Check out behind the scenes photos from the tour: https://t.co/R1R2RLkQ0x pic.twitter.com/vzwCginoP1

After Bridenstine's snippy tweet, suggesting that the commercial crew providers really need to get on with providing commercial crew services, Musk was keen to reassure the administrator that getting the Dragon Crew flying with a crew was a top priority, despite the SpaceX's headline-grabbing Starship prototypes.

The visit came as NASA and Boeing finally set some dates for the aviation giant's Starliner capsule. While Boeing's take on commercial crew transportation, the CST-100 (aka Starliner), has yet to fly in space (unlike SpaceX's Crew Dragon), there is every chance that it might still pip SpaceX to the post in the orbit "capture the flag "competition thanks to Musk's capsule explosively dismantling itself during a ground test.

As a reminder, the last Shuttle mission to the ISS left behind a flag for the first US crew vehicle to retrieve, back before things got quite so delayed.

The "realistic" target dates could see an abort test on November 4 at the White Sands Missile Range in New Mexico. If all goes well, an orbital flight test could happen on December 17 from Space Launch Complex 41 on Cape Canaveral Air Force Station in Florida.

The first crew might then launch at some point during the first quarter of 2020. Musk's rocketeers, who plan to demonstrate an in-flight abort of the Crew Dragon before the end of 2019, are aiming for the same period.

The Pegasus XL was dropped from a Lockheed L-1011 Stargazer aircraft (better known as a TriStar) at an altitude of just under 12km. Ignition occurred five seconds later.

The three-stage rocket is capable of lobbing up to 450kg into Low Earth Orbit and while it remains a number of failures following its 1990 introduction, has enjoyed a reliable run of launching relatively small satellites since 1997.

The concept of launching rockets from the air has also been adopted by Virgin, be it from a custom carrier à la SpaceShipTwo and White Knight Two or dropped from a repurposed Boeing 747.

As for ICON itself, the spacecraft is designed to observe the ionosphere from an altitude of 580km with its instruments pointing at the lowest boundary of space. The aim is to help scientists understand and predict disturbances in the region.

* Yes, we know of it only has four legs, but just look at it.