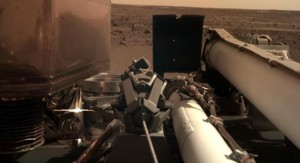 The NASA Space Agency research agency transmits from Mars the Red Planet photo, which was taken in the afternoon after the landing.

About this on Tuesday, November 27, the press service of the American department, wrote "Word and Deed".

"The unwrapped camera, which is in the hands of NASA's InSight, took this picture on the surface of Mars on November 26 – the same day he landed on the Red Planet"- said NASA.

According to the ministry, the image was sent to earth thanks to the Odyssey spacecraft itself, which is now on orbital flights around Mars.

Previously, the InSight research vehicle from the US space agency NASA sent the planet's first image from Mars, but it turned out not to be of high quality because of the dust-covered glass of the device itself.

Remember, automatically controlled unmanned aerial vehicles, InSight was launched on May 5, and on November 26, successfully landed on Mars. It is assumed that in two years the device will explore the depths of the Red Planet to study internal structure and composition.

NASA also fired the rarest clouds on Earth and showed the first shot from the Sun's crown.