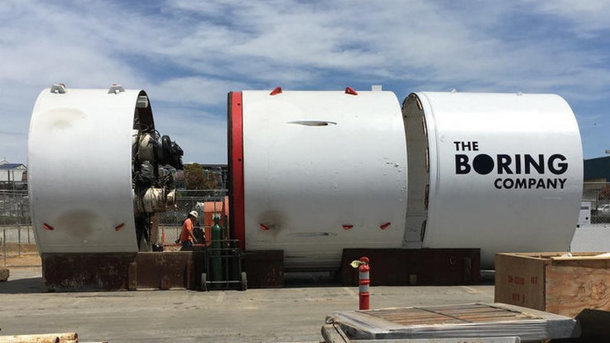 The Mask Company is completing the construction of another 3.2-kilometer test tunnel in the southern suburb of Los Angeles-Hawthorne.

The company of an American businessman, Ilona Mask will not build a test transport tunnel under Sepúlveda Boulevard – one of the busiest transportation arteries in western Los Angeles. As reported by Bloomberg on Tuesday, the Boring Co company abandoned its plan because of a lawsuit from the residents of the prestigious Brentwood district and Sunset Boulevard who were not satisfied that the tunnel would be installed without an environmental impact analysis, TASS reported.

"Boring Co is no longer trying to build an experimental tunnel under Sepulveda Boulevard and instead focuses on building a tunnel to Dodger Stadium", – Bloomberg agents carry joint statements circulated by participants in the process.

According to the San Diego Union Tribune newspaper, the lawsuit was filed in May, but has now been withdrawn, because the parties have reached an agreement. Transaction conditions not disclosed.

According to Bloomberg, Mask's company is completing the construction of another 3.2 km test tunnel on the southern suburb of Los Angeles – Hawthorne – from the parking lot owned by SpaceX (Space Ex) to 120th Street, where Boring Co. headquarters located. A skateboard, a platform on electricity, which will be lowered into a tunnel through the elevator hole, will move along it. The aim of this project is to develop the technology needed to create a transportation system in big cities. Previously, Ilon Musk on Twitter announced that the tunnel will open on December 10.

The opening of the test tunnel is a step towards implementing the Mask plan to build an urban underground transportation system, NBC TV reported earlier. In August, Musk announced plans to install a tunnel about 5 kilometers long between the existing subway station and Dodger (Dodger) Stadium, where "roller skates", designed for 16 passengers, can travel at a speed of about 200 kilometers per hour. However, before construction, this plan must be thoroughly tested in terms of safety and environmental impact.

Previous Mask with the speed of sliding in the Hyperloop tunnel near los angeles.

Also the developers of The Boring Company The Tesla Model S is pushed into an underground tunnel near Los Angeles. According to Mask, the car descends to the ground above the elevator, where it becomes a platform, which will take it to the destination on the magnetic rail.

As is known, in August 2017, the local government issued a permit for the construction and testing of tunnels over three kilometers around SpaceX's headquarters in Hawthorne. Construction of the tunnel began in May. The mask shows overclocking platforms in a tunnel near Los Angeles.

Currently you see the news "Mask will not build a trial tunnel because of a lawsuit from a resident of the prestigious Los Angeles area." Other business news, see blocking "Latest News"