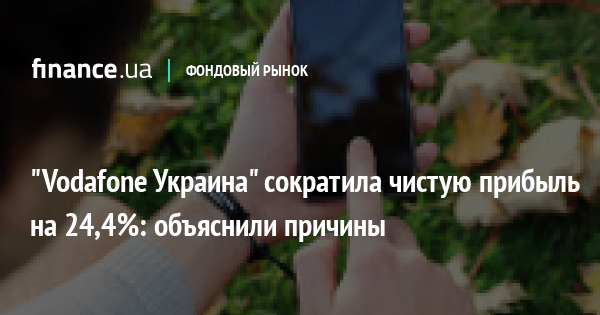 The company "Vodafone Ukraine" (PrJSC "VF Ukraine") in July-September 2018 received a net profit of 393 million UAH, which is 24.4% lower than the figure for July-September-2017.

According to a press release from Ukrainian operators on Tuesday, the reduction in net income was associated with an increase in depreciation costs due to the active spread of 4G and 3G networks.

Company revenue for the third quarter increased by 12.6% – up to 3.3 billion UAH.

"Vodafone Ukraine" shows that indicator Oibda in the third quarter of this year increased by 49.4% compared to the same period last year – up to 1.8 billion UAH, and margin Oibda increased by 13.9 percentage points – up to 54.9%.

The "Vodafone Ukraine" customer base in the reporting period decreased 4.3% – to 19.9 million customers.

The company added that at the end of September 2018, the number of 4G users increased by 75.3%, without determining absolute numbers, and 4G networks covered almost 40% of the country's population.

According to press releases, investment in network infrastructure totaled more than 1 billion UAH for the reporting period and 20 billion UAH – since the commencement of the construction of high-speed cellular internet networks.