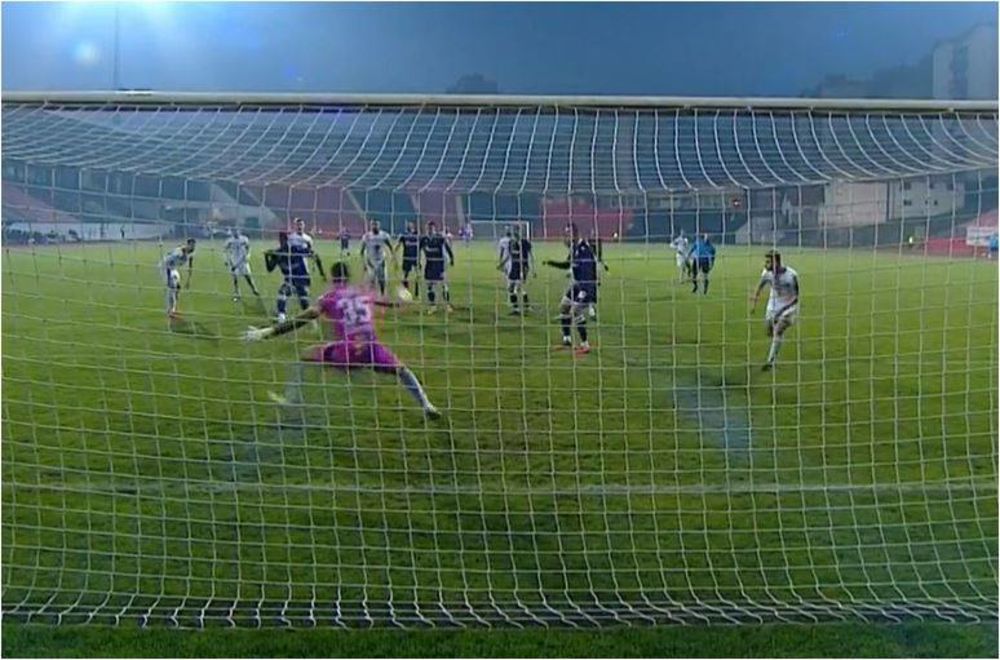 The only goal scorer in the match was Richmond Boacci in the 18th minute.

Boaći reacted very well to the ball that was dropped by Pankov following a cross from Spiridonović.

With a 15th win in the championship two rounds before it ended, the red and whites secured the Serbian autumn title, as they have nine points more than Partizan. Zvezda reached 47 points, and Zlatibor remained at 15 points.

The hosts did not send a single shot into the Red Star’s goal, while the Red and White teams missed quite a bit, especially in the second half.

90 minutes – Referee Grujić extends the second half by three minutes.

Minute 74 – Kanga enters the game instead of Boacci. 70th minute – Vukanović shoots his head and misses from 7-8 meters.

66th minute – Double substitution at Zvezda, Gajić brings in Gobeljić and Simić as replacements for Radulović. In Zlatibor, Miličić replaces the injured Jezdimirović, who leaves the match covered in blood.

65 minutes – A fantastic new defense from goalkeeper Zlatibor Čubraković. Falcinelli goes into the penalty area from the right, tricking two soccer players from Zlatibor, but not the goalkeeper. Only in the 65th minute, the first corner was taken by Zvezda. Falcinelli fired his head after a corner, but Cubrakovic intervened again.

63 minutes – Yellow card for Nikolić from Zvezda who cuts Jezdimirović’s head with his sole. 60th minute – Good chance for Zvezda, Vukanović crosses over from the left but his shot goes high.

Minute 59 – Third substitution at Zlatibor, Janjić out, Nikolov on. Minute 58 – A yellow card for Zivanovic, Zlatibor’s second footballer, written in the Grujic notebook. 58 minutes – Zvezda gets a free kick, but Degenek fouls in attack after a cross. 53 minutes – Falcinelli has two chances, once he shoots his head over the bar, the second time with his foot over Cubrakovic’s goal. 50th minute – Yellow card for Petrović. The Red Star soccer player hit Poček in an elbow jump.

49 minutes – Falcinelli misses a good chance. He fired from the outside from ten meters away.

46 minutes – Four changes, two on either side. The home coach, Zoran Njegus, introduces the experienced Pocek and Zivanovic. On the other hand, Dejan Stanković included Falčineli instead of Spiridonović and Milunović instead of Eraković.

45th minute – Big chance for Zvezda, Nikolic only makes his way into Zlatibor’s top five, waits for goalkeeper Čubraković to fall, and then reacts indifferently, allowing the home keeper to intervene and save the net.

30th minute – The first yellow card of the match is earned by footballer Zlatibor Radović who inappropriately stops Petrović on the counter-attack.

18th minute – GOOOAAAL! Richmond Boacci is the scorer. The ball bounced happily from Panlov to the red and white striker, who had no trouble scoring from a few meters away. Earlier, Spiridonović took a free kick from the right side.

16th minute – Boaći hits the crossbar! Gobeljić’s great penetration on the right after the ball was taken over by Pankov, Boaći fired a head shot, but the ball ended over the crossbar.

11th minute – For now, the most intriguing situation of the match, Zlatibor takes a free kick from about 20 yards, Krstić’s shot but the live wall does its job. Minute 7 – a more organized Zvezda first strike. Vukanović decided to pass Spiridonović in a situation where he could have shot himself. In the end, nothing endangered the home team’s goal. 6th minute – First corner, but no chance for Zlatibor. 4th minute – It is interesting that Zvezda received Zlatibor’s last goal in a Cup match. Since then, the network has been inactive for 400 minutes. 3rd minute – Krstić tries to shoot, but is no danger for Borjan’s goal.

The red and white team’s head of professional staff, Dejan Stanković, insisted that he would not be able to count on the six important first-team players, that the expenditure of the players was high, but he was not looking for an alibi and that the players who came out knew what to do:

“The Zlatibor team annoyed us seriously last time, even though we had possession of the ball and a lot of chances we didn’t use. Football is like that, they shot twice and scored us. We worked hard to reverse the result and for sure we will enter. game in the same way as in Belgrade. We will win from the first minute, I know it will be difficult for us. We are professional, fatigue is present, but every game is a new challenge and we have to chase new victories and I will always start with the best team Ivanic, Rodic, Ben, Pavkov, Gavric and Katai will not play against Zlatibor. Those are six very important football players, plus the guys who played against Hoffenheim. We’ll see, we have training where we will form a team. “For Zlatibor. We spent time after the European games, the health bulletin is not good, we have problems, but I am still bad.” myself behind my words. I’m not looking for an alibi and anyone who goes into the field knows what to do. We’ll see how we play. Maybe it’ll be two nails, maybe three. We have to see who feels how, and then we will “make” a team. When you are at the Red Star you don’t pick goals, it’s important, of course, to be first on the table, to show maximum results in all three lines. I think we are on the right track, we go into every game to the fullest and we know what we need to do. Success falls to the players, because we started in July, we have a lot of games at our feet. The path itself is tough, lots of play, eight or nine games a month. It’s not easy playing at Zvezda because you constantly have to prove yourself game after game and it will never end, which I love. “

The home team’s head of professional staff, Zoran Njeguš, pointed out that the red and white teams are efficient both at home and abroad, therefore it is necessary to find adequate answers to their way of playing:

“We have personnel problems, people are tired in the Cup game against Red Star. I don’t believe Zvezda will change anything in the game against us, in our league they always play the same, attacking both as a guest and as a host, they give a lot. goals. We have also seen against many teams that they score three or four goals on each side. We will try to prepare adequately and respond to the way they play. They have a large selection of quality players and a pretty good bench. As for our series which is good. interrupted in the last half, you can’t win every game. Metalac is much better than us in some segments of the game, in the midfield and in the final. We failed a bit there, we had a few chances to score, but this time we didn’t make it. “Of course, we are in the relegation zone, and the schedule is a little more difficult now. Zvezda will come to the place there we are, so we’re going to Radnički from Niš, which has had bad results lately. In the last half, Macva came to us, everyone thought Macva was eliminated, but I don’t believe they played good football. Every point is important for us, and the opponents who are our competitors have a match, I don’t even believe that they will win that easily. We believe that we can win a few more points until the end, that’s for sure. The colder weather has started and every day you can expect a player to come to you before training and say, I’m cold, I can’t train, so he has to do a test, and that doesn’t mean we really have adequate substitutes and a long bench. , to explain. football, especially with young bonus players. We have problems there, but what is there, we have to face and fight this situation. “

The match between Zlatibor and Crvena zvezda will start at 4pm.