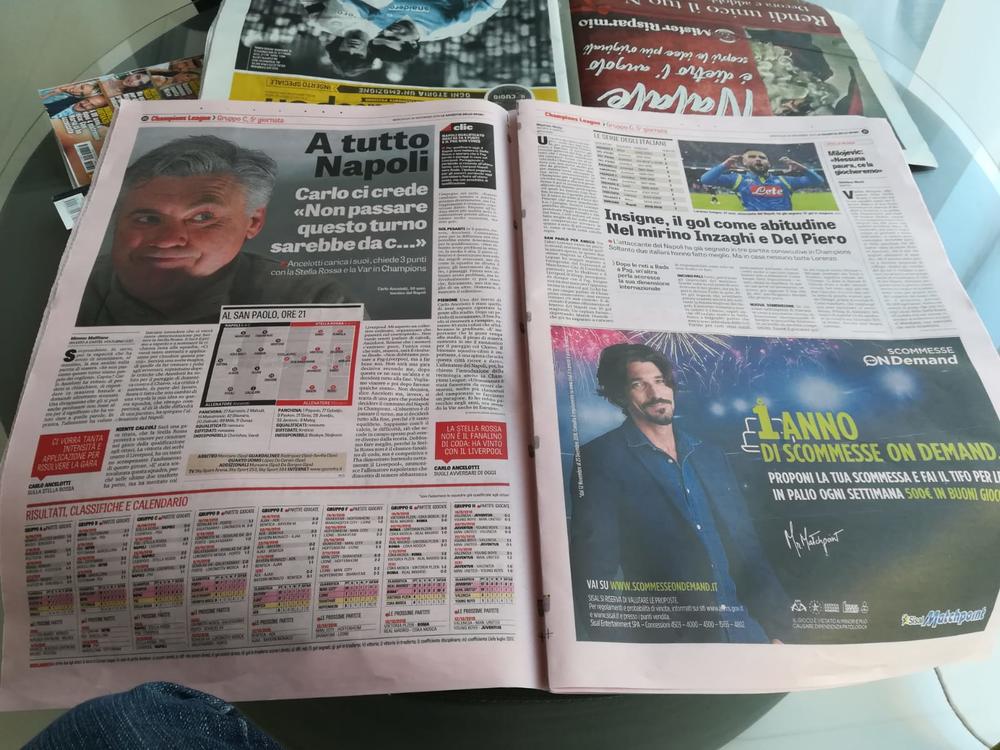 The "Gazeta" circulation on the cover page brought Ronaldo and the 100th victory in the Champions League, which was unprecedented in the hands of one player. Announcement of the matches of Napoli and Red Star is only on page 20, with the Karl Ancelotti exam which says:

"If we don't win red and white, then we will all be evil."

There is a story about Lorenzo Insignu, Napoli's best footballer, while Vladan Milojević is presented on that side corner, in one column, without photos. Obviously, in "Gazeta" they thought that Red Star had nothing to look for against Napoli and that Italy guaranteed three points.

The local newspaper "Il Matino" devoted a game between Napoli and Red Star three sides, more sides than Gazeta. And here, to the maximum, Red Star is underestimated, not given or missed the chance for victory.

The first text titled "Everyone in Naples" spoke of the importance of the match to host, while others say that in the case of Napoli's victory and that PSG France will not win at Liverpool, the team from southern Italy will definitely qualify for the next phase of the League Champions. On the third side is the story of Lorenzo Insignu, as a great talent for Italian football, discussed by coach Carlo Ancelotti and select "Azura" Roberto Manzini.

At the end of "Corriere Work Sport", but the edition for southern Italy dedicates much of the space to Napoli and Red Star in the Champions League. On the front page is Carlo Ancelotti who said that it is possible that Napoli will not qualify for the next round of elite competition, but it will not be sad for the club. There is also a text under the heading "Operation kacima" which talks about tactics and combinators of Italian coaches for dinner games. "Korires" also carried photos and statements by Vlado Milojević, with the title saying that coach Crvena Zvezda appreciated Ancelotti's colleagues, who he said had won the Champions League three times. One text is dedicated to the ultras of Naples, who said that because of the possibility of an incident the club could receive a fine.

It's interesting that all Italian journalists don't know the best composition from Red Star. Thus, "Gazeta" announced that the Serbian club would play in a 4-4-2 formation with Ben and Stojiljkovic leading, while "Korijere" hit Milojevic's 4-2-3-1 favorite, announcing Simic in midfield and Ben at Spitz .