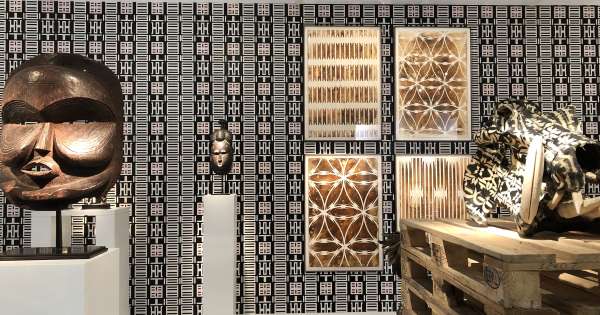 For the third edition, contemporary art exhibitions have improved with the arrival of new galleries and young artists.

On both sides of the Channel, relating to contemporary African art, the market does not develop at the same speed. In London, the 1:54 Fair has experienced, in just five years, supersonic growth, which developed in New York and Marrakech. In Paris, AKAA (Also Known As Africa), which opened its doors at the Carreau du Temple on November 9, was rather quiet. Canceled in 2015 after the attack, the show failed to start since it was launched in 2016. " In Paris, development takes longerrecognizes its founder, Victoria Mann. French collectors must ensure that this is not a flash of fire, a passing trend. Paris market is more complex to work. "


AKAA Fair: "We must be careful that Africa does not become a fad"

This also applies to auctions. Only 30% of buyers from the sale of African contemporary art organized by the Piasa are French. " You really have to do pedagogical work, sighing the Parisian gallianus of Anne de Villepoix, who participated for the first time at AKAA. Many French people don't make a difference between African or African American artists! "

For Marc Stanes, one of the founders of the Curated South African Ebony Gallery, " French collectors may be more conservative, but they are solid. "These solid collectors, the Ela Espaço Luanda Arte gallery didn't really cross in 2017. But for this Angola brand, AKAA has a major asset: the cost." The fair fee is half as much as 1:54, and we have to make a choice because our currency has been devalued by 60% in one year ", Justifying the director, Dominik Maia Tanner." Even if London is a collector's capital, Paris remains a top destination for West African galleries, finally observed Nicole Louis-Sidney, LouiSimone Guirandou's gallery director. We want to give a second chance to be fair. "

Without competing again with the 1:54 exhibition, this third edition of AKAA has improved with the arrival of new galleries. Watch out for Didier Claes! A large sparkling booth – is that really necessary? – serves as a work for some very beautiful objects from classic African art that interact with images and statues of South African Kendell Geers. " It must be pointed out that African art is not limited to classical objects. This continues to this day and the artist is also watching over the past "Said Didier Claes, who noted porosity between two classical and contemporary art clients.

Big names like Kendell Geers and his colleague Roger Ballen, whose markets are international, remain extraordinary in a show that sits with younger artists such as Ivorian Joana Choumali or Safaa Erruas from Morocco, and several new discoveries such as Adjaratou Ouedraogo, presented by Anne de Villepoix. In a small, soft, and naive picture that explores childhood problems, the 37-year-old Burkinabé is perfect for this changing body and mind. Another heart, at Magnin-A, the paintings of Malian Amadou Sanogo who mocked the rulers of Africa and, even more so, were ruled. Endowed with musical instruments but losing their heads, they appear as kind-hearted speakers who are unable to think.

AKAA also does not forget the numbers set but it is not known in France such as Ivory Coast Ernest Dükü, whose latest images examine DNA nucleotides to better deal with other determinisms that burden us. Among the discoveries, don't miss out on Jean Brolly's Adama Kouyaté fund, a Mali photographer who opened his first photo studio in 1949. Failing to live in Bamako, he did not know the same recognition as Malik Sidibé who had been too often compared. However, black and white shots are free of canon studio photos with their lighting, shadows, sometimes very spontaneous poses, reflecting the rare involvement between the photographer and the model.

Another interesting rediscovery, Ernesto Shikhani of Mozambique, is better known for his work at the time of decolonization, but whose gallery Perve prefers to present the latest, abstract, with bright palettes. Thus, AKAA is on the right track. Slowly or, more precisely, at his own pace.