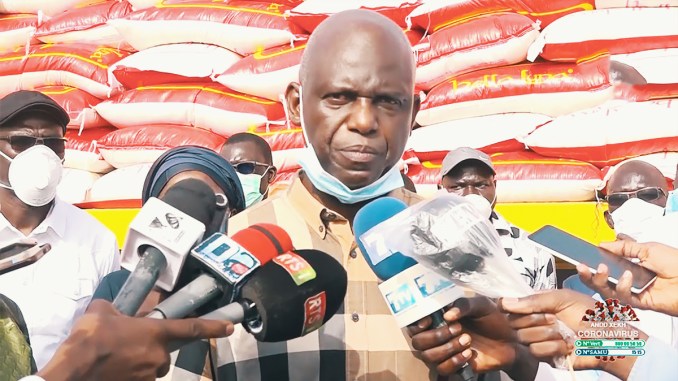 The management of 69 billion francs of CFA intended for the purchase and delivery of food to support a population affected by the health crisis linked to the Coronavirus is still up for debate. Birame Souleye Diop, general administrator of the “Les patriotes” party, investigated the matter and asked Minister Mansour Faye’s call to the National Assembly so that he could explain himself, in front of national representatives, how this financial windfall had been spent.

“We saw what he did with the 69 billion he was given. We haven’t clarified that yet, have moved elsewhere to protect it. “He’s going to do the same thing again because he’s used to facts,” said Birame Souleye Diop, guest of the Sunday Jury. According to him, the normal operation expected from the fund was not carried out.

According to him, Pastef has documented evidence of all these operations and, if the timing is right, he will brandish it to the detriment of Minister Mansour Faye. “We see how the rice market is offered. We are waiting for the National Assembly to do its job. They said they would audit everything. Mansour Faye just went and answered the deputies. We have definite and precise evidence of all the operations that have taken place, “said the administrator Pastef / les Patriotes.

“THE PAST DOES NOT PROVIDE A CERTIFICATE OF GOOD CONDUCT”

In addition, he was also asked about the reconciliation between Barthélémy Dias, mayor of Mermoz Sacré-Coeur and Me Moussa Diop, former CEO of Dakar Dem Dikk. The reconciliation was facilitated by Pastef the Patriots leader Ousmane Sonko. Indeed, Birame Souleye Diop did not see any problem with the role played by its leader who, he recalled, only brought together two residents who had argued.

Regarding his views on the alleged mismanagement directed at Me Moussa Diop, he pointed out that in this country there are institutions responsible for ensuring the protection of resources and the functioning of state-owned companies. ‘Country.

“It’s not for Pastef to issue a certificate of good behavior. It’s up to the court to do it, ”he said, noting that oversight bodies such as the State Inspectorate General and Ofnac were there to carry out this mission.

“We support full accountability with a free and independent trial that is not subject to the orders and executions of the Minister of Justice and the executive branch,” he said.

Ligue 1: Sofiane Diop, what a nice surprise AS Monaco