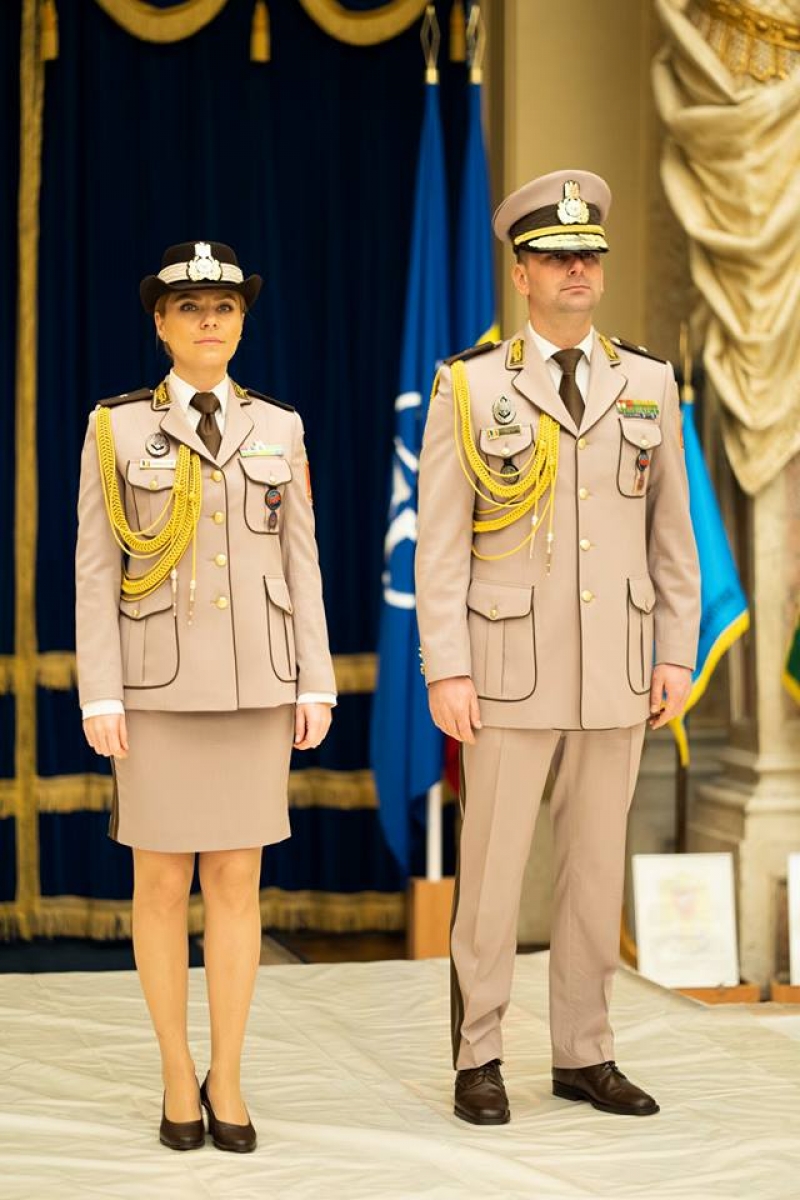 Proposals for new city uniforms Army and Air Force, created by designer Alexandru Ciucu and inspired by French, Italian or American soldiers, are presented on Tuesday at the National Military Circle.

Jackets, bibs, coats, pajamas, skirts on women's knees, and elegant hats with beige and blue wool and wool (modern polyester – n.r.) are displayed on the podium of the Military Circle.

The Chief of General Staff of the Department of Defense, Brigadier General Constantin Negrea, was present at the event, saying that military clothing was proven since 1939, and this proposal tried to "enhance the image of the Romanian Army" through elegance and provided.

"This is quite a long time and we feel the need to enhance the image of the Romanian army with elegance, stubbornness and attitude. You cannot wear a uniform if you have not reached your heart, so we will present it in all garrisons in this country. We will wait the opinion of our colleagues, opinions, if they want to change, we look forward to them, they love me, they are attractive, they have a line of elegance, they provide a military picture. (…) We have a paradigm shift, we have cities and services and fighting for battle, for theater operations, "said General Negrea.

Proposals for new city uniforms of the Army and Air Force were created pro bono by fashion designer Alexandru Ciucu, the official supplier of the Royal House of Romania.

The creator of fashion said it was a collection dedicated to King Michael, indicating that the creation created for the Romanian army was his country's prize on Centenary Year.

Also read: Good news for FCSB! The transfer is coming. How many are involved

"Thank you for the opportunity to write history, because in one way or another this is fashion history. This is a big project where I am very happy, pro bono, because I consider it my country – a year before King Mihai, personally, dedicated a uniform collection This is to commemorate His Majesty (…) This is a collection dedicated to King Michael because there is a very close relationship between King Mihai and the Romanian Army, "Ciucu said at the end of the presentation.

The designer revealed that the French army inspired him most important as a nuance in his collection, but also the US Army, from which he was mainly inspired by hats, as well as Italian soldiers, for clothing that was disguised.

Also read: Teodorovici made an announcement! Will Romania target this year's deficit target?

"We are a team of 15 people in the workshop and we are doing this work in 15 months, almost, even though our actual work has not been done so far – more time has been spent on cloth … I have some inconveniences, not out of first and must rebuild terrestrial clothing, because that is not the code we want, "said the fashion designer.

Alexandru Ciucu's biggest challenge is not to copy others or to defeat themselves.

"Women's hats have given us something more than a fork, because we went to the classic version that was felt. The rest of the men were made of cloth on a classic model, but with some minor changes inspired by British soldiers.) I tried to avoid the first urge, to make the face of a man close to that of the carabinieri, not to say the Nazis, because they are similar, they are inspired by each other, "said Ciucu.

He said that the main element of novelty was a contrast jacket, which we found only from the rank of officer. "This exists as a building element for both non-commander and army officers, but it is no different. Practically, we make general and public uniforms easier to recognize." We want to be a loved one, "People will like it, feel it in it," the designer said.

Also read: Tariceanu has made an announcement! What happened to the MCV report?

One of the soldiers who presented some uniforms, sergeant Dănuţ Hârnea, said he felt very good in new clothes, it was comfortable, and Lieutenant Cristina Dumitru, one of the military mannequins on this occasion, added that it was fashionable and uniform. must have certain elegance and dignity.

The Minister of Defense, Gabriel Leş, also attended the event, congratulating designer Alexandru Ciucu and said he felt discriminated against, because the new clothes were not for the stomach.

Also read: It's decided! Sova is making an announcement! When will the feasibility study begin for the highway that is highly desirable

"I don't regret that I came here tonight, but I feel a little discriminatory. All the proposals for jackets that have been placed without stomachs and I think we should work a little longer here," Les said.

At the end of the presentation, the head of the General Defense Staff, General Nicolae Ciucă, gave an award to the designer Alexandru Ciucu as a sign of appreciation for the Defense Staff Honor Symbol.

The creation of a new city military uniform and service has taken into account all categories of military personnel and will cover the entire range of military clothing articles.

In the first months of 2019, the proposed models will be presented in the garrison in the country, so that the soldiers, in their activities or reserves, expressed their opinions in the form of an evaluation questionnaire. Then, operational testing of new models will be carried out to be able to equip the Romanian Armed Forces with the city's new military uniforms and services.