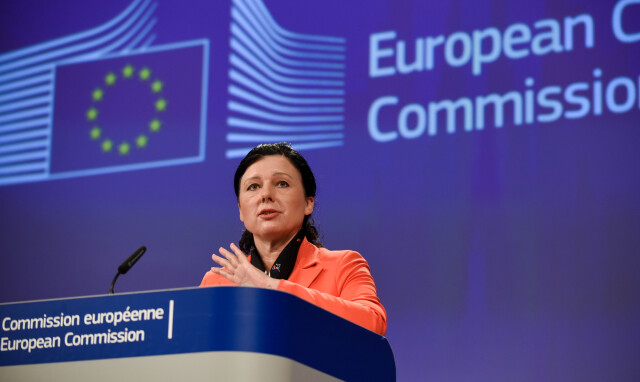 The EU Commissioner for Justice in connection with a trial initiated at the initiative of the European Commission on Poland said that "the action continues and will end".

The Czech Commissioner, in a conversation with a reporter from Czech public radio, stressed that the latest amendment to the Law in the Supreme Court did not stop the process which began on the basis of Article 7 of the Agreement on the European Union. It is about a case of alleged violations of the rule of law by the Polish authorities introducing changes in the judicial dimension.

"The European Commission's complaints about Poland in the European Court regarding the reform of the Supreme Court are upheld and will continue despite changes that occurred last week in Warsaw," wrote iROZHLAS radio journalist Filip Harzer on Twitter after speaking with Commissioner Jourová.

The words of the EU Commissioner were commented on Wednesday by TVN24, Adam Bodnar, the Ombudsman. When asked in the "Piasecki" conversation, whether the amendment to the Supreme Court Law was "the end of the war" with the European Commission, he said: "We must consider whether the Commission will really withdraw its case.

– In my opinion, there is a legal argument for the fact that it will not withdraw from the case – he said.

– I am, of course, happy that this bill has been amended, but I think that I will return to the question Marek Borowski: what are the benefits for us? – Bodnar pointed.

He considered that the Polish government must rely on a decrease in emotions in relations with the European Commission.

He also pointed out that there were still problems with EU procedures regarding Poland's compliance with the rule of law. According to Bodnar, it must continue, because "we still have problems with the independence of fruit farming as a rule in the context of the functioning of the general court, disciplinary division, the National Council of Justice and the Constitutional Court."

– This requires further explanation, dialogue and further pressure – he judged.

Amendments to the Law on MV occurred after the decision of the European Court of Justice.

On October 19, the CJEU agreed with the European Commission's proposal and decided initially to implement so-called temporary measures. CJEU wants, among other things, that judges who are forced to retire in the light of new regulations are restored.

On Thursday and Friday, the aura may be abundant in dangerous atmospheric phenomena. Synoptics of the Meteorological Institute and …
read more »

This is not only about the "Constitution" inscription, but also about showing that the constitution is for you, for me – he said in …
read more »

Play: Comment: Jews feel safer in Eastern Europe than in the west

Play: EU justice commissioner: The European Commission will not withdraw its complaints regarding Poland

In Zdzieszowice (Opole province), a fire burned several apartments in a former hotel, which served as a social building. Most …
read more »

In Poznań, two cars collided with the bus. Nothing serious happens to anyone, but traffic on Warszawska street …
read more »

Play: Bodnar is currently holding the former head of the Polish Financial Supervision Authority: You don't have to do it at 6:00 at home

I did not see a spectacular stop. If we can call someone to the prosecutor's office, it's enough to be human …
read more »

Play: A dangerous implant. The doctor said
about "a rare type of cancer"

Breast implants differ in size, content and shape, but also in the level of roughness. If the bulge in this …
read more »

A six meter metal strip falls from the ceiling of the Arena in Poznan. Gregorian band fans lost their evening concert. And they can …
read more »

Play: Question after the pilot's death, the report is gone. "A disrespectful approach to the lives of Polish soldiers"

What is the threat of a delayed modernization of the army? TVN24's "Black on White" program returns to the MiG-29 fighter plane crash, …
read more »