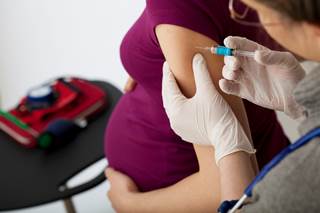 The highest pertussis antibody concentration is associated with immunization at the beginning of the third trimester, especially weeks 27 to 30 pregnancies.

Maternal immunization during the third trimester with tetanus, diphtheria, and acellular pertussis (Tdap) vaccines is associated with higher neonatal pertussis antibody concentrations compared with no immunization, according to data published in JAMA.

Tdap vaccine is recommended in the United States for weeks 27 to 36 pregnancies for prevention of subsequent pertussis in infants. A prospective, observational, neonatal cohort study in Houston, Texas, this was conducted between December 2013 and March 2014 to determine the optimal gestational age for immunization to maximize neonatal antibody concentrations.

As a result of observational research designs, causal interpretations of data are not possible, the researchers noted. In addition, research is carried out in a single and exploratory center without formal power calculations, therefore greater research is needed to verify results. Finally, serum samples preimmunization and postimmunization were not collected, no women were immunized during the second trimester of pregnancy, and low numbers were immunized at the end of pregnancy.

Although further research is needed, the researchers conclude that this study shows "immunization with the Tdap vaccine for weeks 27 to 36 pregnancies, as recommended by [Centers for Disease Control and Prevention] to prevent life-threatening pertussis in young infants, compared with no immunization was associated with significantly higher concentrations of pertussis antibodies in neonates at birth. "The researchers concluded by stating that the highest antibody concentrations were associated with immunization in the early third trimester, specifically weeks 27 to 30.