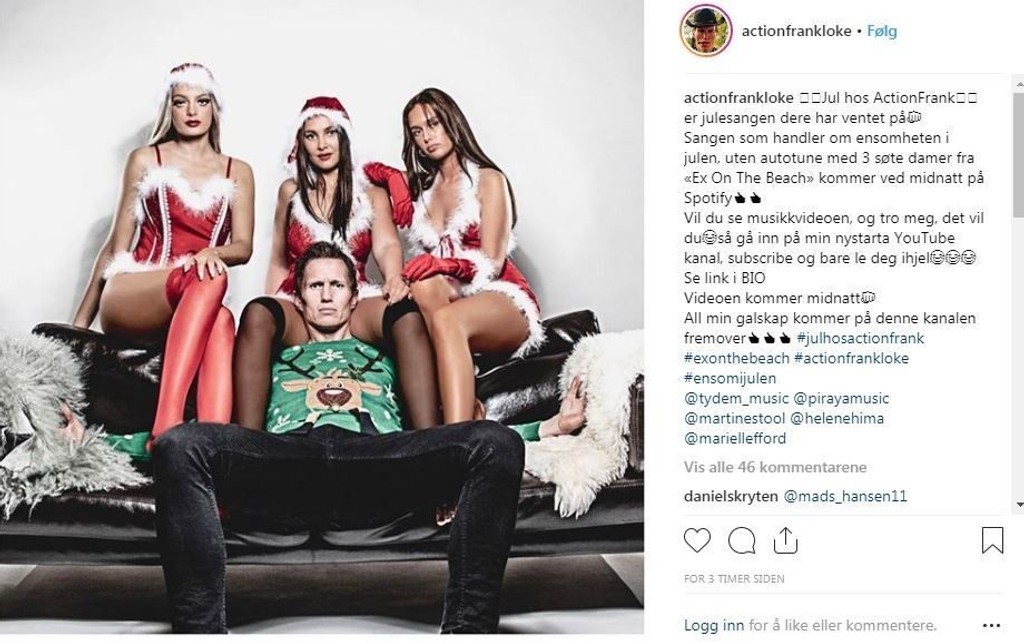 Including three Ex on beach participants.

The Christmas celebration has not yet sunk, and former handball Frank Løke knows to exploit the chaos. On his Instagram account, he announced Tuesday night for a new song – released tonight until Wednesday.

– Christmas at ActionFrank is the Christmas song you've been waiting for. A song about loneliness on Christmas, without autotune, with three beautiful women from "Ex On The Beach" appearing at midnight.

Right after midnight, Loke released a new photo where he announced that the song was on Spotify and YouTube.

In his photo he has Martine Stol, Helene Hima and Marielle Efford – all participants in the TVNorge series "Ex on the beach".

And no one sings without video – and, according to Løke, it's someone who wants to look raw.

– Want to watch a music video, and believe me, you want to go to my new YouTube channel, subscribe and commit suicide.

Youtube Channel is the latest addition from Leek to reach fans, and he promises that all his madness will be on this channel in the future.

Løke was previously known as a handball player, but last year he was labeled as Action Frank – often dubbed mankini. Minimal clothing caused Løge's farewell to "Should We Dance" to fall when he appeared on the TV screen without doing it with TV 2.

Read more: Frank Løke can't get the "Should We Dance" Final

Christmas is not the first Leek – he has also done "ActionFrank". This allows you to check enough below or read more about this: – Singing "Should We Dance" Scandal

Similarly, here you can get more fresh news and fresh opinions!