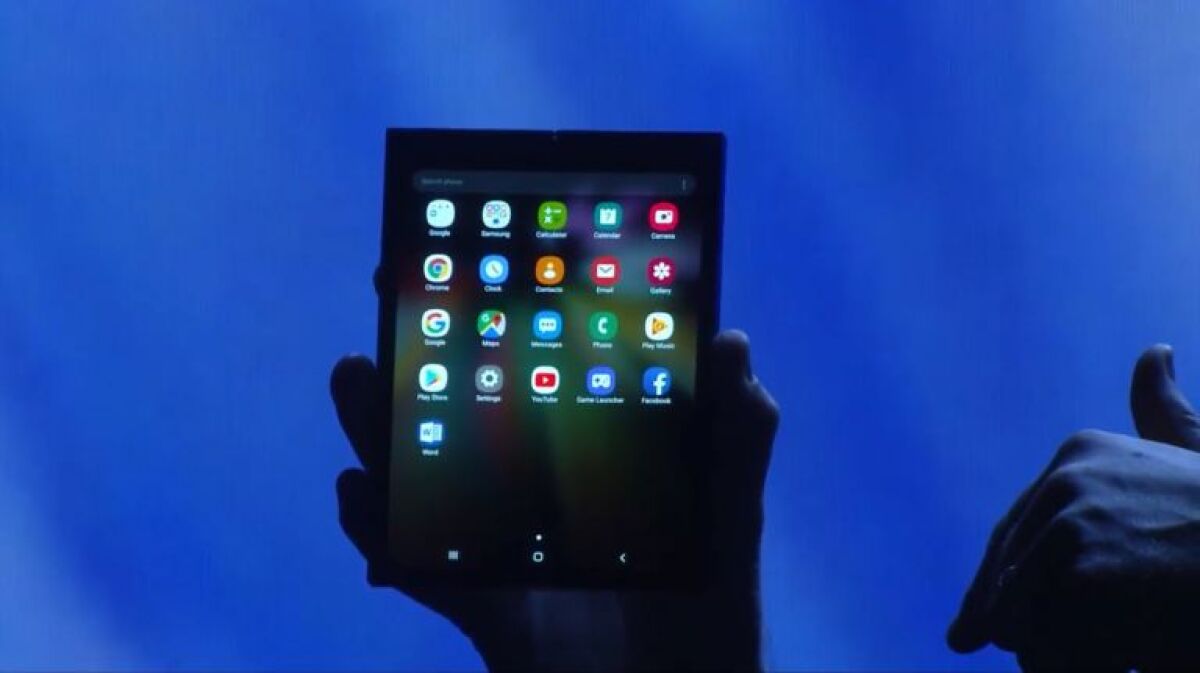 SAN FRANCISCO (Expansion) – Samsung presented on Wednesday the concept of a flexible screen cellphone called Infinity Flex Display.
The device, when used, works like a 7.3-inch tablet, but when closed, it can function as if it were a telephone, with the ability to maintain continuity in the application and actions taken by the user, even up to three applications simultaneously without having to change from one to another.
The concept will be produced in the coming months, said Justin Denison, senior vice president of mobile products at Samsung Electronics, during his developer conference in San Francisco.
Samsung executives say that this device is able to bend and unfold without degradation even after thousands of repetitions, because of this they use flexible adhesives and reduce screen thickness by 45%.
This device has been developed with Google's collaboration to adjust Android usage in it and from now on it will allow the participation of developers to do it.

The company also provides enhanced experience using the device through the UI interface concept, which will work with Infinity Flex Display devices.

On the phone, the interface is changed so that the things that are usually done with this equipment are made in various parts of the screen that are easily reached with one hand. That is, the top of the smartphone is an area that must be seen, while towards the center and bottom, is the area to interact.

These changes can be experienced through beta in November only in the United States, Germany and South Korea. Worldwide, this increase will reach the latest Samsung phones in January 2019.

Faced with an increase in the use of smart assistants, Samsung placed its stakes to improve itself, Bixby to deal with Amazon Alexa, Google Assistant or Siri Apple.

During the developer conference, Eui-Suk Chung, EVP, Head of Samsung Artificial Software and Intelligence presented a change to the now smart company assistant, Bixby, to turn it into a measurable artificial intelligence platform.

In this case, Bixby will reach more company equipment such as televisions, refrigerators or tablets, as well as third-party equipment. The artificial intelligence platform will now open for the first time for developers who carry the same tools as the Samsung team through the Developer Studio, while also speaking five new languages ​​(English, Spanish, Spanish, Italian, German and French).

In the near future Samsung will present a market around Bixby so that developers who work with this platform generate revenue.

"We believe that Bixby will change the way people use technology. Bixby users don't need to know how to do things but what they want to do and Bixby will do it for them," Eui-Suk Chung said during the conference.

Developers will now be able to make "capsules" under the Bixby Capsules program, where they will add skills or functions to Bixby, just like the smart assistant from Amazon and Google do now , for different equipment, including Samsung Galaxy Home speakers, which were presented at the Unpacked event from a South Korean company in August 2018 or produced voice-controlled applications by partners such as Netflix, Hulu, HBO Now or Spotify for the television segment of the brand

At present, Bixby, with only two years of existence, has around 7% of the market in the United States, according to figures from the Business Insider Intelligence Unit until May 2018. According to data from Statista consultants, by 2020, Google Assistants will be the market leader with 43% from this, followed by Amazon Alexa with 34%.