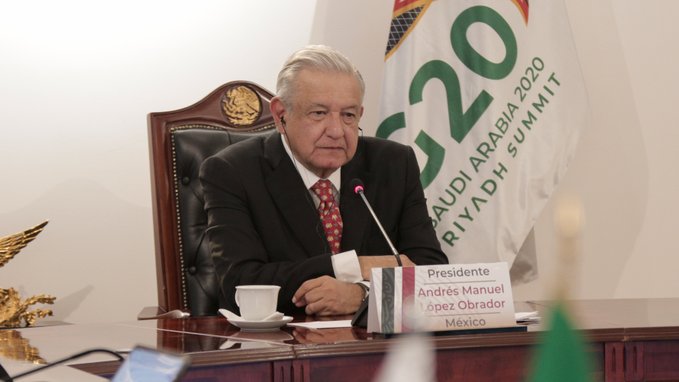 At the G20 Virtual Leaders Summit, President Andrés Manuel López Obrador proposed to heads of state that vaccines, medical care and medicines against COVID-19 should be free and universally accessible, according to El Heraldo de México.

“Health is a fundamental human right which must be guaranteed by the State, regardless of the motive of profit, medical care, vaccines and medicines must be free and universally applicable, as established by the Mexican resolution adopted at the United Nations, almost unanimously, with 179 countries are supportive, “he said.

In his message, the President of Mexico said that to face the health and economic crisis, rescue must be carried out from the ground up with the attention of those most in need.

“Economic rescue must be done from the ground up, first helping the poor, and not focusing government action solely on allocating public funds to bankrupt companies or financial institutions, not converting private debt to public debt, avoiding debt, and less if it’s for the benefit of few people and at the expense of the suffering of many people and a new generation, ”he said.

López Obrador supports the promotion of healthy eating, physical exercise and exercise to prevent diseases that increase the risk of disease.

He called on “to believe more in the responsibility of the people, guarantee freedom under all circumstances and to abandon the temptation to impose authoritarian measures such as excessive confinement, curfews, non-existent force, all for convictions and reasons.” (THE HERALD OF MEXICO)