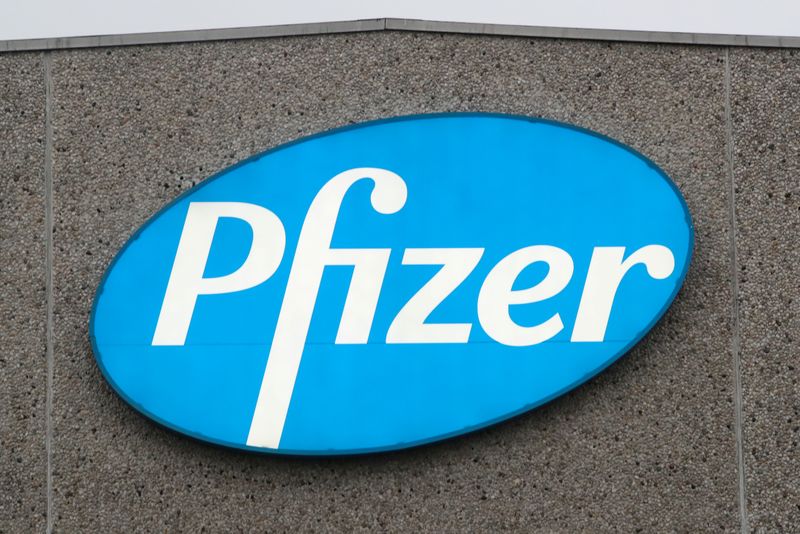 © Reuters. FILE PHOTO: The Pfizer logo is seen at the entrance to the Pfizer factory in Puurs

LONDON (Reuters) – The UK is preparing to become the first country to launch the Pfizer / BioNTech COVID-19 vaccine this week, initially providing injections in hospitals before distributing the stock to doctors’ clinics, the government said on Sunday.

The first dose is set to be administered on Tuesday, with the National Health Service (NHS) giving top priority to vaccinating people over their 80s, frontline health workers and nursing home staff and residents.

In total, the UK has ordered 40 million doses. Since each person needs two doses, that’s enough to vaccinate 20 million people in a country of 67 million people.

About 800,000 doses are expected to be available in the first week.

The initial doses that have arrived from Belgium are stored in safe locations across the country, where their quality will be checked, the health ministry said.

The launch coincides with a critical and dangerous moment in negotiations between the UK and the European Union on a post-Brexit trade agreement.

The status quo transition period will end on December 31st and the no-deal scenario will cause major disruption in the movement of goods between the UK and EU countries such as Belgium.

The Observer newspaper reported on Sunday that, under the UK government’s contingency plan, tens of millions of doses of vaccine could be flown to Britain by military aircraft to avoid port delays caused by Brexit.

The head of the drug regulatory agency that approved the vaccine, June Raine, was asked if he was concerned that the deal would not risk disrupting the vaccine launch.

“We have practiced, we are ready, we are fully prepared for any possible outcome,” Raine said in an interview on BBC television.

The Pfizer / BioNTech vaccine has severe storage requirements. It needs to be stored at -70C (-94F) and only last five days in a regular refrigerator.

To that end, the health ministry said the vaccine will be given first in 50 hospitals. It said it would take several hours to thaw each vaccine and prepare it for use.

The UK’s NHS has written to general practitioners, telling them to get ready to start giving vaccinations through the services of a local doctor from 14 December.

Rather than running clinics in individual operations, local doctor groups will operate more than 1,000 vaccination centers across the country, the government said.

The vaccine box contains five packs of 975 doses, but special regulatory approval is required to separate them. A senior medical official said that although he hopes to divide the packages and deliver them directly to the nursing home, it is not guaranteed.

Britain is one of the first countries to launch vaccinations outside the context of clinical trials, raising hopes that the surge can quickly turn against a virus that has killed nearly 1.5 million people worldwide and devastated the world’s economy.

With a high level of vaccine skepticism worrying public health experts, the Times and Mail on Sunday newspaper reported that Queen Elizabeth, 94, and her husband Prince Philip, 99, would “let it be known” when they received the injection.

The Queen is highly admired in British society, and her public support for the vaccine will be a powerful message against anti-vaccination misinformation circulating online.