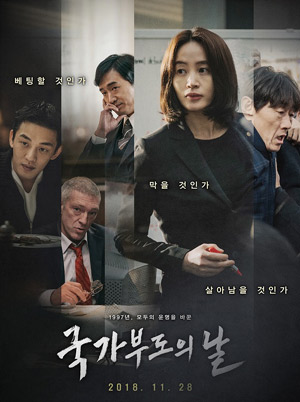 The much anticipated Korean financial film "Default" has been sold to 17 countries before its release here. Countries include Canada, Hong Kong, Indonesia, Italy, Japan, Singapore, Taiwan and the US.

The cast of the film not only includes top stars Kim Hye-soo and Yoo Ah-in but also French actor Vincent Cassel, who made his first appearance in a Korean film.

Set during the 1997 Asian financial crisis, the film dramatized backroom negotiations between the International Monetary Fund and Korean officials that led to the country's IMF bailout.

"Default" is scheduled to hit the local cinema on November 28. It will be released in the US on November 30 in Indonesia, Singapore and Taiwan in December, and in Hong Kong and Macau in January next year.