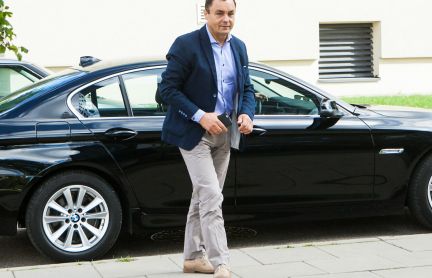 Petras Gražulis’ troubles don’t stop – he has just finished explaining to the women and immediately gets the attention of the AGO. Photo by Dainius Labutis

Early September, pretrial investigations into politics, launched in the spring, were suspended. It started after the hairdresser accused P. Gražulis of rape. The Vilnius District Prosecutor’s Office, after evaluating the witness testimony and the data collected, stated that there was no such crime.

In early November, conflict broke out at the home of former Seimas member, beloved Birutė Navickaitė P. Gražulis. After that, together with police officers, the young woman was visited by representatives of the State Child Rights Protection and Adoption Service. Then it was decided that P. Gražulis’ daughter would remain with her father.

Despite the fact that P. Gražulis was accused by the girl’s mother of kidnapping her child, the politician herself stated that she fully supported Birutė and believed that she would recover and become a good mother.

2016 was launched in 2019. The data available in the pre-trial investigative material, which was discontinued in September 2015, allows us to reasonably assume that Member Seimas P. Gražulis from 2015 to 2017. may have sought and received property profits from a private company, acting in the company’s best interests and too meddling in the activities of other civil servants in Lithuania and Russia. He is also accused of offering to act illegally on the company’s behalf by offering to give Russian officials money.

According to the prosecutor, with such actions a member of Seimas systematically, for a long time exercised his status and influence as the representative of the highest power, deprived himself of the prestige of his current duties, the authority of Seimas and members of Seimas, violated the principles enshrined in the Constitution. and non-money damages. Member Seimas P. Gražulis refused to testify as a special witness.

Assessing the prosecutor’s office’s plans, the politician had no doubts that this time Seimas would relinquish his immunity. It is true that P. Gražulis, who did not admit his guilt at the prosecutor’s office, was considered a political persecution. According to him, sitting behind Lithuania during the Soviet era, now he will sit a second time, “because Lithuania is becoming Soviet again.”

“I can’t say anything more about the girl, because the matter is being handled at the moment. The child stayed with me for a few days, then returned to her mother and now there are no problems.

Regarding the actions I am accusing me of, I remain convinced that this is an attempt by the Landsberg clan to deal with me. They failed to beat me during the election, even though they both hired the media and opinion leaders, so another route was chosen: the prosecutor’s office. Although I still don’t understand what I am being accused of, it is clear that in this way the Landsbergists want to get rid of one of the most clumsy politicians and their greatest critics.

Let’s compare – if I buy a plot of land worth one and a half million euros or keep tens of millions in a cupboard – I will definitely sit down. And here Landsbergs, despite all the scandals that have emerged, is inviolable.

Of course, in 30 years spent in politics, maybe somewhere “some sort of dust is left in your shoes” because there is everything in life. That’s what they seem to be looking for at this time as “dust.” But that’s good. If Landsberg drinks me, that means I’m part of their clan. Because they haunt me, it shows that I serve people.

I don’t know in court yet. I would have told the previous head of state – the judge by default. Under the leadership of Gitan Nausėda, the legal system changed somewhat – the President did not interfere in court work, E. Pašilis did not run for a second term. This points to some changes that made us think it might still be appropriate to take legal action.