Four in the family, after the accusations against her husband, were a painful test: her mother decided to speak openly 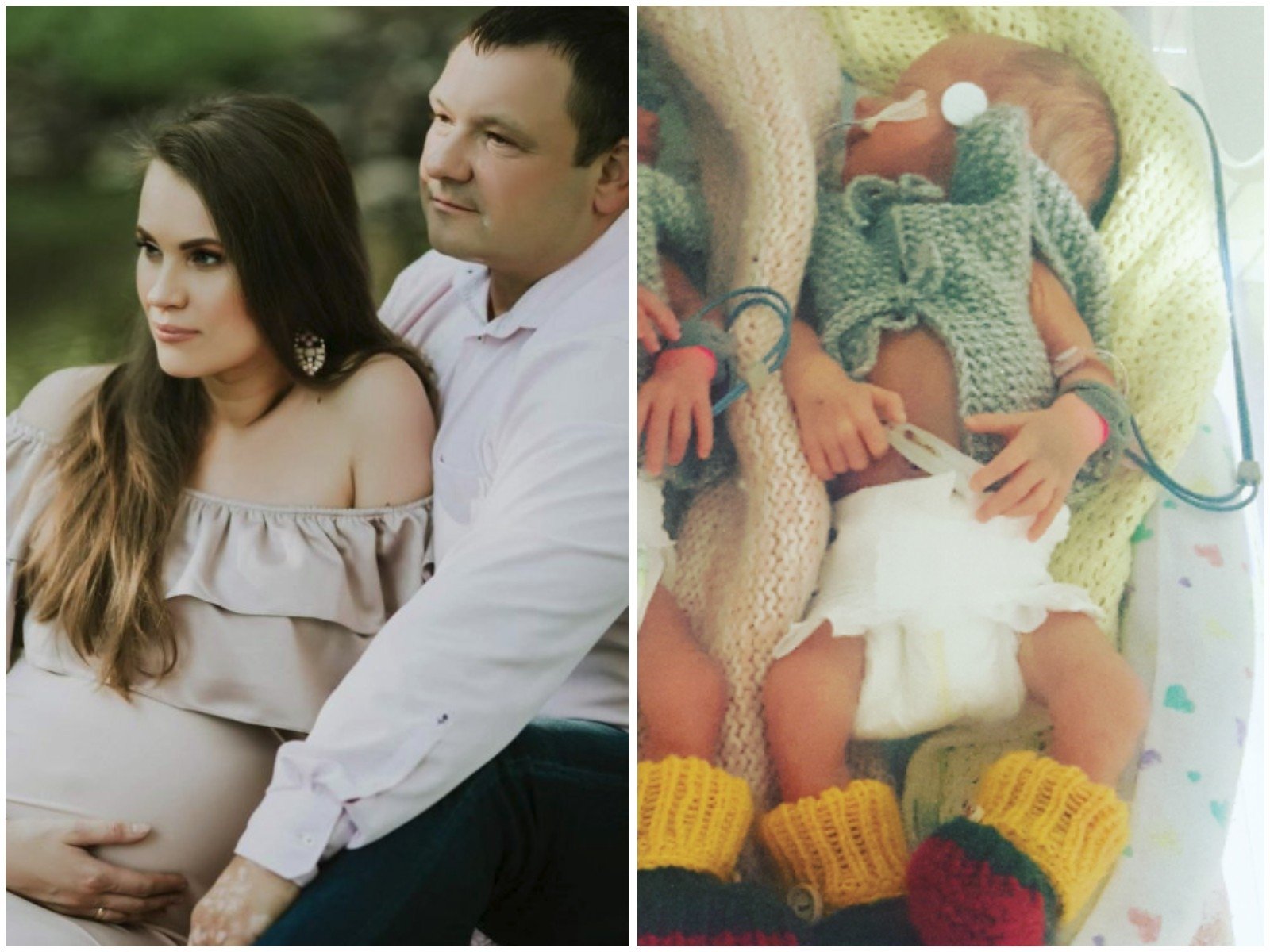 "It hurts me very much. We did not choose four children, they came to our family. On Saturday, one month will come to them, and the community has highlighted all of their lives. What were the mistakes of children and fathers in the past? "- said V. Paltanaviciene.

Thousands of people sent congratulations and wishes for more than a month ago on the social networking site, which reached three Pan-Armenian boys and girls. However, after this week in the City Council Council politicians unanimously appointed Andrias and Viktorija Paltanavičius from a budget of 18 thousand 240 euros, there was tremendous upheaval – comments about father's criminal past were fulfilled. This policy is based on a large number of allowances in August to approve procedures for appointment and payment of lump sums. According to him, 80 basic social benefits can be given to one family member – EUR 3040. In the past, the city government could support a family of only up to 1500 euros. Fourfold parents will be the first to receive increased payments.

Protect the mayor and the minister who thanks you

Politicians also reminded of old events. A Seimas member, former head of the Panevezys Board Povilas Urbeshys Special Investigation Agency, commented not only on the fact that A. Paltanavičius, who had the nickname Paltankė, was associated with a group organized by criminals who had been involved in extortion. According to lawmakers, he is also now "sometimes photographing in stories relating to football betting." Such public words are called Victorian rumors by the village level. "I don't deny my husband's past, but he does his sentence. Everyone has the right to rehabilitation.

Why do you need to reassemble and associate it with the children's future? P. Urbysy talks about rumors at the village level. My husband has been accused of agreeing to bets, although they have repeatedly given it in recent years, "said V. Paltanavičienė. And in fact, the family protects not only one of the city government's gratitude to A. Paltanavicius for celebrating sports achievements in celebrating Panevėžys.

In 2016, Panevezys was awarded the mayor for his contribution to the achievement of the "Baltija" gymnasium in the hall. In the "A" league championship of the year "Baltija" won first place. A. Paltanavičius – President of this club. In 2017, he was awarded a prize, this time for second place in the Championship for "Baltic". Awards on shelves and evaluations for blood donors. 2015 then the Lithuanian Blood Donor Certificate was given to A. Paltanavičius, Minister of Health Rimantas Šalasševičiūtė.

Don't deny the past

Victoria did not try to deny or hide that there were also bad shadows in the past. This is also part of this person's life story. 19 years ago, he was convicted of extortion from the famous owner of "Babi" – Rimantas Okulius and his brother Arunas Stumbrias. A. Paltanavičius court sent 6.5 years for strange things. Released with freedom, a few years later, in 2005, Andrius again had to go to court with another suspect.

The man was blamed for beating the young man. This case ends with the complete release of A. Paltanavičius. In the same year, Panevėžys found himself in the police station on charges of hacking a nightclub and was convicted of hooliganism.

As a result of biographies such as A. Paltanavičius, there are questions about whether it is possible to support a family with city budget money that his father once violated community rules? "This question is very painful for us and I think it does not make sense. After all, the money will be spent on children's needs. At the municipal instruction, we fill out the application with the help of specialists, and we really do not expect that amount will allocated. This was a big surprise for us, "said V. Paltanavičienė.

"The two children must be accompanied by several adults, some of the smaller children from the first husband's marriage grew, and we will not be able to do that with another car," said Viktoria.

So far, the family does not have a wheelchair. According to Mom, two double rooms are needed, but finding them at affordable prices is already a challenge. "The cost of high-quality double trolleys can reach 1,000 euros. We won't even look expensive like that. We see at least half cheaper. The most important thing is to get it. The shop, which we contacted, told us so far in Poland such wheelchair production it has been temporarily suspended, "V. Paltanavičienė tells of the difficulties faced.

The four-year-old mother likes to receive a lot of support from single people at the beginning of a small life, organizations – some give adult children's clothes, and others new to the little things they need to grow their babies. However, according to V. Paltanavičienė, who had not started in a situation like this, it was difficult to imagine the family routine of raising four newborn babies. Mothers usually count diapers, fuse, other important supplies, even those that are special for a bottle of around 20 euros per day.

"For our pre-nurses, even diapers need a size of zero, it would be difficult to find such supermarkets. The necessary and more expensive mixes specifically designed to often lose newborns. And where various drugs, supplements, vitamins," – said V. Paltanaviciene. For now, care for your little one is supported by Victoria's mother.

However, he also has serious health problems, so the family will definitely have to look for caregivers. "Believe me, it really has something to do with the four babies. It will be difficult for someone to deal with it. Andrius works, besides, he has to deal with many things – I can't leave home," said V. Paltanaviciene. According to him, the task of small mothers is to see women who have the same fate in Western countries with jealousy. In one European country, triplets were provided, and a four-year family was given a social worker.

Counters, or 18 thousand According to Viktoria, it is impossible for families to work for families. Before a complicated pregnancy, V. Paltanavičienė was employed by an employee and still worked with a business permit. "When asking, or vice versa, for families raising three children who were not born at the same time?" But in this case, women get a salary for each, a young man can wear senior clothes. Many don't know that, regardless of how much I work, I will receive from the country as an only child. Sodra pays no more than the monthly salary and does not matter to the country, is born one or four children ", – reminds Viktoria. Only additional monthly social assistance for each child, allocated by the Municipality, will contribute to child support.

Speaking of concerns and increasing family costs, V. Paltanavičienė has repeatedly stressed that there were no complaints and no objections. "We never live with taxpayers' money. We work, are not socially supported, even though we cannot afford it. We live in homes purchased for loans, which we pay every month, husbands from the first marriage have three children, one of whom has become students, whose education is also paid for. This is our life and our concerns, ourselves and ourselves. Most importantly, all children are strong and healthy, "Victoria said calmly.

Encourage both to get rid of a family that is happy with four gems not wanting to remember what you experienced and last for months waiting. Even now Victoria can't talk about starting a pregnancy without worry. First of all, a woman from the doctor heard the twins waiting. And after a few weeks after the examination, parents learn about their four lives. Joy, confused by surprise, was immediately weakened by medical staff.

"We were encouraged to accept two children to be moved. My husband and I flatly refused. This should have been completed before 12 weeks' gestation. We have consistently stressed that we must decide to eliminate two, or that the four children are disabled "The brutal pressure lasted one and a half months," said V. Paltanavičienė. Doctor Vilnius turned away from two parents who refused to do so. "Only through good people did we go to the Kaunas clinic.

At the end of my life, I will thank them for taking care of us, we are always happy that everything will be fine. Thanks to doctor Kaunas, especially professor Professor Vlad Gintautas, all babies are born healthy and strong.

Now, I think that changing the coincidence is with us – at first, the pressure of the medical staff, now from the public. I see my anxiety spread to children. Feeling that they are also troublesome, "said Victoria. Dok V. Gintautas Panevezys is today is the first month.

According to Mother, each character has been proven. Princess Patricia, the family leader, is the most powerful and even weighted brother. His identical brothers, obviously, will not be separated throughout their lives.

And the Rhine had four heads, in a short time, getting his name from an old man who spoke king in Spanish. "It's like a real king now – a serious, controlled, brave man," Victoria said softly. So far, parents remain small from the eyes of others. "We really don't care about hiding it, but it really isn't the time. When this happens, it will depend on us, not politicians or the media," said V. Paltanavičienė.