Why does Meegan stand away from the Queen at the Anniversary celebration?

City News: – Millions of minutes are silent for two minutes throughout the UK in the hundred years from the end of the First World War, on Sunday, November 11.

The royal family officially marks the 100th anniversary of the end of World War I in what is called Memorial Day, in London, from a balcony overlooking the war memorial. 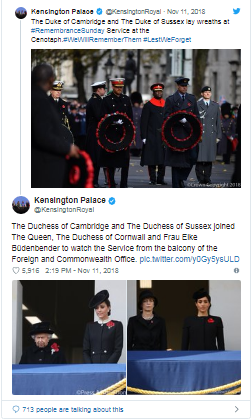 Queen Elizabeth II, the Duchess of Cornwall, the Duke of Cambridge and the Duchess of Sussex were among the attendees, but the Royal Family news publishers saw something rather strange during the ceremony, about parking the royal family.

Queen, Kate Middleton, and Camilla stood together on one balcony to watch Memorial Day, while Megan Markle stood on another balcony in a different window.

37-year-old Megan was not alone on the balcony, but joined Elke Bodenbinder, wife of German President Frank-Walter Steinmeier.

Many later explained that Megan stood apart from the queen, the Duchess of Cornwall and the Duke of Cambridge, that Megan had asked him to look after the President's wife, a sign that the Queen believed in the ability of the Duchess of Sussex to deal diplomatically.

However, many who believe it do not, claim that the Duke of Sussex has been ignored by the Queen.

Joe Little, editor in chief of the "Majesty" newspaper, said that he thought it was all about the "royal order".

Because the balcony of each window is small, it is almost impossible to accommodate more than three people together. Because of the royal order of Prince Charles, Prince William and Prince Harry, according to the monarchy, Camilla and Kate will take precedence over the Queen on the balcony.

Although Megan was not a member of the royal family, he was given a very important position for his establishment.

For example, during a Megan performance in Trooping the Color, for the first time in June, he stood behind Prince William and his wife, Kate, and this was in accordance with the Royal Order. For the hierarchy in the tribune organization, where William was an older brother and of course stood in the front row with his wife.

Whatever the reason for the location of Megan Markle standing on a separate balcony from the Queen, it was undoubtedly good. (Russia Today)