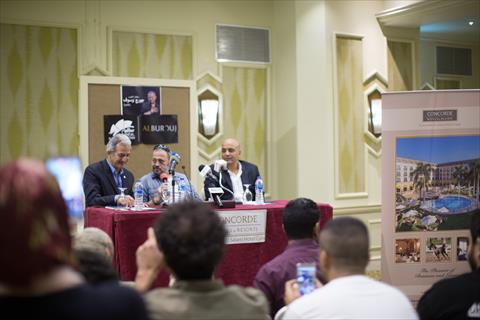 Mohammed Abdul Moneim Al-Sawy Culturewheel held a press conference for Sultan Al-Tarab George Wassouf, as part of the preparation for his concert at the Al-Borouj Theater in Sakia.

The conference began on the third this afternoon, at the hotel chosen by «George» for its founding, before Engineer Mohamed Abdel Moneim El Sawy.

He thanked «George» at the beginning of the interview, the organizer for allowing him to be the center of the audience in Egypt, and expressed his joy to revive the ceremony at the opening of the Albrouj theater.

He continued: "Egypt is in my heart … If Egypt is stable, get everything done."

He continued: "I like to sing Egyptian dialects like in most of the songs that I present, such as Mother World and Mother of Art", hoping Egypt will have more prosperity and successful projects.

As for new singers, George commented, "Many of them are good, but they have to work harder. The most important thing in art is" sweet words and beautiful melodies. "

"I don't sing anything," he said. "Words have beautiful meanings and melodies, because art is not a game."

George stressed that the music industry was over, and that music was now being carried out, because of the influx of trade and social networking sites in all respects.

He said he wrote his autobiography, but he had not yet decided to ask it, refusing to comment on his political views. "I am an artist, respect my Republican Party, and keep my opinion for myself," he said.