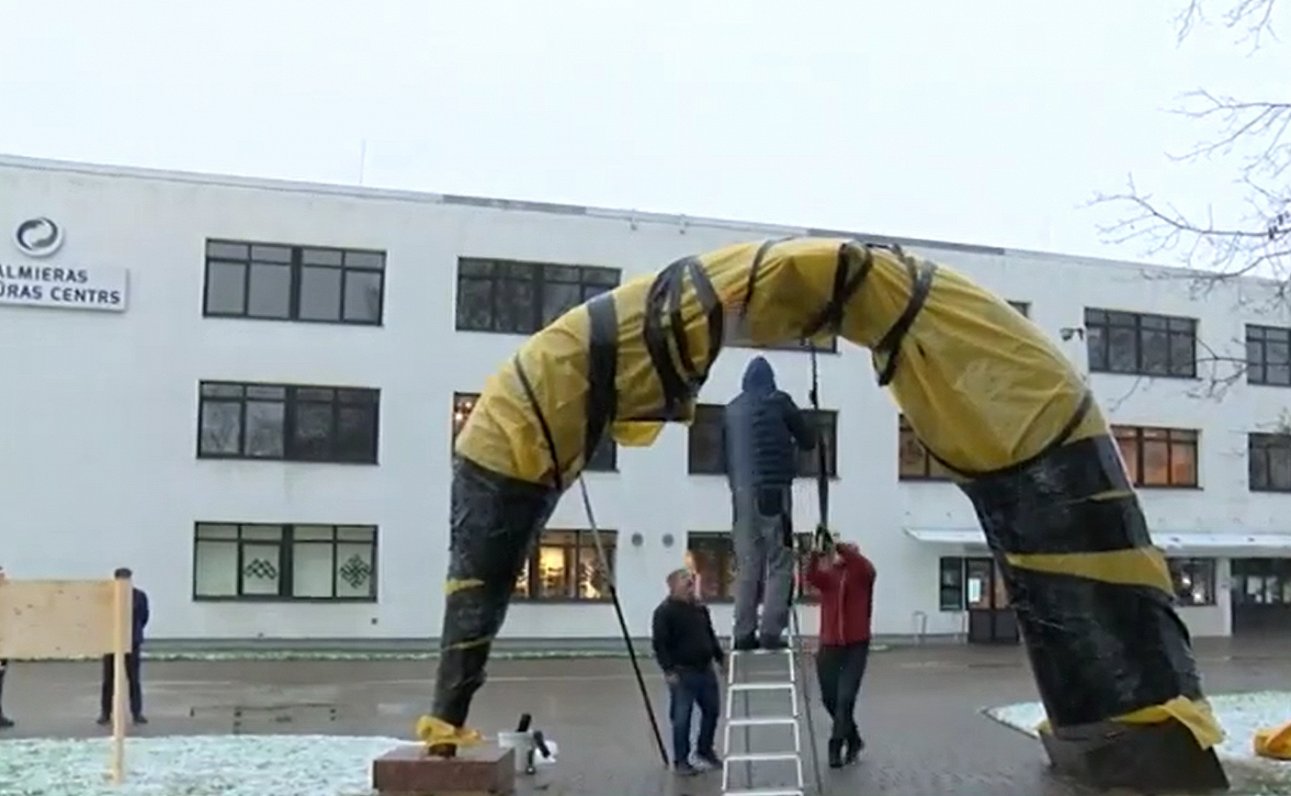 The “Sculpture Black Days” campaign continues in various regions. Also in Valmiera, expressing their position on the coming tax reform, the statues are covered with film. Unlike the campaign in Riga, in Valmiera the statues were dressed in bright colors.

Sculptor Valmiera is also concerned about the upcoming tax reforms. The first sculpture of an urban environment, which is covered, is the work of artist Andris Vārpa “Fountain of Light”.

Andris Vārpa believes that the tax change will be a devastating blow to the sculpture industry, especially for young artists who need to continue to develop. Although artists who are experiencing difficulties can ask the State Cultural Capital Fund for help, this is not a solution.

We have many creative artists with good ideas and “cultural capital” [Valsts kultūrkapitāla fonds] only a small portion can afford. Now that he has to pay more, he will be able to pay less, ”said Vārpa.

The position of the artist being created on the street is only a visible part of the “iceberg,” says renowned sculptor Gleb Panteleev. There have been discussions with politicians, but a different attitude has been accepted. The sculptor described it as a wall built by artists in Old Riga, on the Dome Square.

“Of course, I congratulate what happened in Valmiera today, because Valmiera shows solidarity with us. I think that Valmiera’s actions around art also have a deeper essence, because the changes not only affect artists, but also small entrepreneurs, ”said Panteļejevs.

It is planned to decide next year’s budget in Saeima this week.

If no changes in tax reform are coming, the artists are ready to continue the protests.

Concerns about tax reforms coming next year were expressed by a family of Latvian sculptors, who launched the “Black Days of Sculpture” campaign in Riga on November 12, covering their own monuments.

Next year, it is planned to increase the minimum wage to 500 euros, increase the guaranteed minimum income to 109 euros, reduce compulsory social insurance contributions by one percentage point, introduce mandatory minimum social contributions and other changes from July 1.

Representatives from the cultural sector disagreed with the proposed changes for several reasons and have repeatedly opposed them, also holding flash “Wall of Misunderstanding” protests.

Therefore, the government agreed to keep eligible costs for beneficiaries at 25% and 50%, which are also the current norm.

Discussions continue on how to deal with social security for those working in alternative tax regimes. It is currently estimated that all regimes will be changed to two: one will pay taxes under the general tax regime, the other will be the self-employed regime, in which a minimum social contribution must be paid.

It is estimated that the self-employed with low wages will have to pay 10% of their income for social contributions, but at higher wages – a certain level must be paid at least from the minimum wage.

It has also been agreed that social tax payments by self-employed persons will be overseen by the SRS and not by social services, as previously proposed.

Meanwhile, starting July 2021, royalty recipients who are not registered as economic actors will be subject to an income tax of 25% personal income tax, if the annual turnover does not exceed 25,000 euros, while higher turnover will be taxed at 40%. 80% of the withholding will go towards state compulsory social insurance contributions and 20% for personal income tax. This model is slated to be phased out from 2022.

Highlight text and press Ctrl + Enterto send the text to be edited!

Highlight text and press Report bugs button to send the text to be edited!