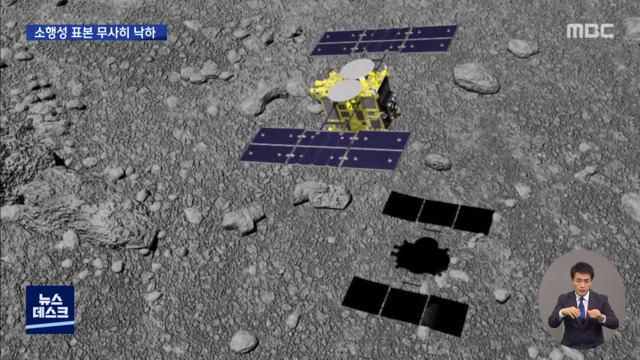 This is news from outer space.

Dirt from asteroids deep in the universe comes to Earth.

It was collected and shipped by the Japanese spacecraft.

It has flown a great distance more than 13,000 times the distance between Earth and the Moon.

Hope was raised that this land could unlock the secrets of the creation of the earth and solar system.

At 2:30 a.m., a light with a long tail dangling like a comet appeared in the humid night sky.

A capsule 40 cm in diameter separated from the Japanese asteroid probe Hayabusa2 entered the atmosphere at a speed of 12 km per second and fell into the desert south of Australia.

Applause and cheers erupted from the control center near Tokyo, where I watched while holding my breath.

The research team managed to recover the capsules by tracking the signals, and began analyzing the gas contained in the capsules before they were transported to Japan.

Hayabusa 2, launched in December 2014, arrived in the air above the asteroid ‘Ryugu’, 340 million kilometers from Earth in three and a half years.

After that, a metal bullet was fired at the asteroid’s surface to create a puddle about 10 meters in diameter, then landed on the asteroid and took a sample of the subsurface soil.

Soon after, Hayabusa 2 continues the journey home, and after a year or so, reaches 220,000 kilometers above the earth and sends a capsule filled with samples to earth.

The sample collected by Hayabusa2 was about 0.1 gram.

Academically, Hayabusa 1 brought soil to the surface of the asteroid in 2010, and this time securing subsurface land for the first time.

Surface soils can be damaged by meteorite impacts and radiation, called ‘space weathering’, but subsurface land will likely remain the same when the solar system was born 4.6 billion years ago.

[야마카와 히로시/JAXA 이사장]“We hope to achieve results that are closer to the process of the creation of the solar system and the origin of the water sent to Earth.”

The Japanese Aerospace Organization plans to share half of the sample with foreign research institutions such as the US Aeronautics and Space Administration, and reserve a portion for future research.

Hayabusa 2 completed its first mission after sailing 5.2 billion km in 6 years, and plans to fly 10 billion km for another 11 years to try to land on another asteroid.

This is Hyunseung Ko from MBC News in Tokyo.