Son Heung-min, Lee Kang-in, and Jung Jung-yong were nominated for the AFC Awards 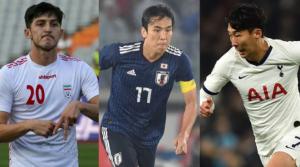 The AFC announced on November 15 candidates for 14 categories of the 2019 AFC Awards.

Lee Kang-in has been nominated for the AFC Promising Men of the Year. Lee Kang-in, who won Korea's highest runner-up in the 2019 FIFA U-20 World Cup (U-20) and also won the Golden Ball, the best player in the tournament, was Aban Hiroki (Barcelona) from Japan and Doan Ban from Vietnam. He was nominated with Howe (Heyrenbane).

Coach Jung Jung-yong, who was runner-up at this year's FIFA U-20 World Cup, was nominated for this year's men's manager award. Chung's competitors are Otsuki Tsuyoshi Urawa, Red Diamonds, and Oiwa Ko Kashima Antlers, who lead the J-League team in Japan.

The Asian Football Federation Award (AFC) 2019 will be held at the Hong Kong Convention Center on December 2.