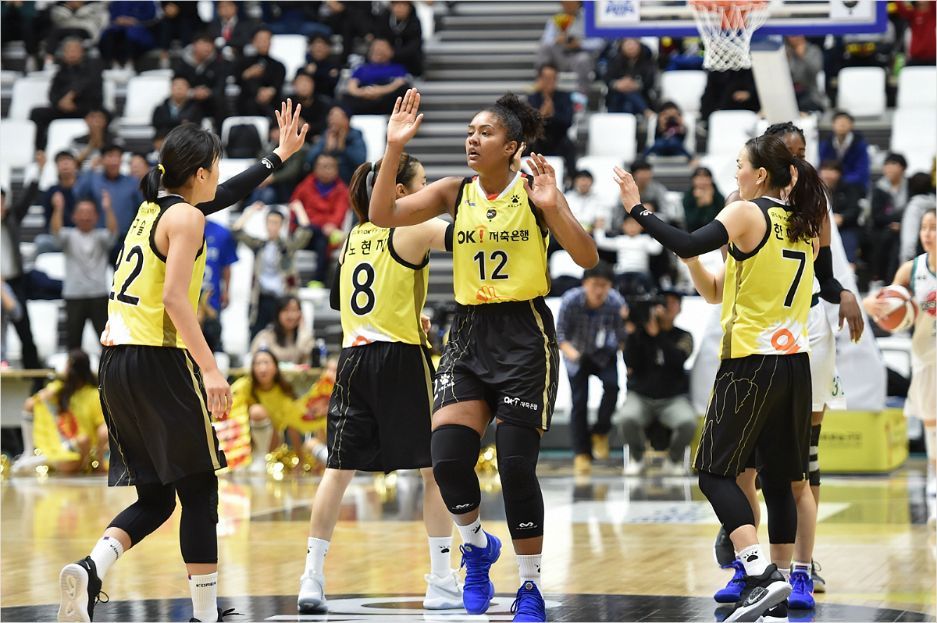 When the whistle sounded, all players on the bench came out. The players cheered at the court. This is not an ordinary victory scene. The new name was only the moment of Savings Bank's first victory.

OK Savings Bank won the Woori Bank 2018-2019 season at Seo-Suwon Cilbo Gymnasium with a score of 89-85 in a home match against KEB Hana Bank.

Last season, KDB Life had 22 consecutive wins in uniform, and KDB Life gave up the club's operations, preparing for the season with the WKBL consignment operation. Before the opening of the season, I signed a sponsor naming agreement with OK Savings Bank.

Objective is the weakest. However, Jeon Seonhwa, Kim Sang-dam, and beads are the only domestic maniacs, so regular managers are the second quarter where foreign players don't play.

Second quarter scores are 27 to 19. OK The Savings Bank is in front of 48 to 38 in the first and second quarters.

But Hana Bank's pursuit is strong. Third quarter was pushed to 20-29. In the end, he left three minutes to Kim Suyeul, leaving a quarter and one minute and 30 seconds to end in the fourth quarter. Every time I can catch a turn, the turnover comes out.

OK Savings banks are more concentrated. After being dominated by goals by Damiris Dantas, I got a clue.

After a series of video readings, I got a victory.

Noon took a missed shot from Dantas, but the deadline for the attack had passed. However, this is confirmed by the video that reads that the dancer's shot hit his lips. It took 14 seconds to attack again. 14 seconds before finally, Han Chijin committed a violation in Goa. The video was also read, and the bad word was read before the deadline for the attack. Two successful free throws. Game complete.

He also won 22 consecutive wins, his first win after a new start, and his victory over the regular coach captain's debut.