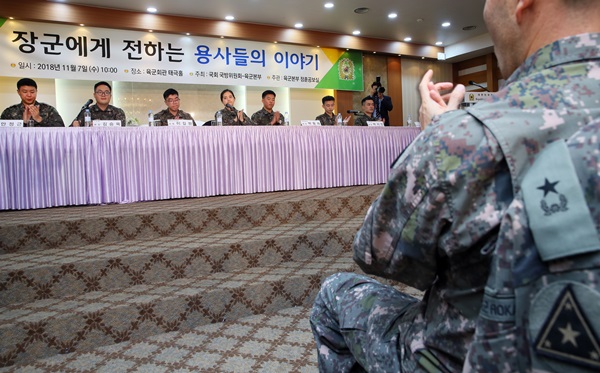 "From 1 to 10, control the freedom of the soldier" … A free speech
"The role is just different, but …" "Soldiers who don't communicate with knights are defeated"
Participating in army-led seminars including military officers, division heads including Kim Yong-woo

"I am a star member with stars, and I am a member of the same company, but the role is different."

At the seminar held on July 7 at the Yongsan Army Hall in Seoul with the theme & # 39; The story of the warriors to the general, & # 39; the soldiers responsible for announcing the theme urged the military and commanders to change their perceptions.

This is the first seminar on "The Stories of the Public-Knowing Fighters" whose soldiers led the announcement for the first time since Changgeun. The main commanders including Army Chief of Staff Kim Yong-woo, Major Officer from the Army Headquarters, Commander of the Field Army, Commander of the Army, and Army Commander attended the ceremony.

The army presenter speaks unexpectedly in front of the stars.

In the announcement of the theme, "We are fighters," the 28th Division gangs said "There are a lot of troops in the world, but I think that soldiers who control the freedom of soldiers from 1 to 10 like the ROK Army are now communist state soldiers or military states. "He said.

Ahn said, "Officers, senior officers, cadres and soldiers, seniority and successors are all the same, with different roles and classes," and the army changed only when the soldiers 'gazes changed and the soldiers' authority changed. "When I accept it, I can respect the elders and other executives."

Division 5 commander Kim Seung-wook said in his presentation on the theme "Transition of Awareness of Soldiers", "At present, a warrior is a person who cannot judge and act alone." "The status of a warrior who is not permitted to act in his own name, this is similar to a guardianship system."

Kim said, "In the early twenties, soldiers were too young, and unlike the United States, Korea was a mandatory military state. We must overcome rooted stereotypes." When autonomy and military responsibility are given, we will resolve the military culture that we want with peace of mind. "

Lee Gil-hyeong, a member of the Gyeongdong University working group, pointed out that when soldiers applied to the Army headquarters intranet proposal square, there was no response from the announcement titled "Soldiers who do not communicate with soldiers must lose." Meanwhile, "We propose the idea of ​​a 2.0 square idea that soldiers can participate."

This company, "15th Division, Kwon Bum-su, headquarters of the Army headquarters intranet," I think my mind can change the world makes me breathe "without anyone answering, but I stand firm with my ideas." Soldiers continue knock on the door of communication, "said the army, now is the time to open the door.

Next, Dr. Park Dong-ha, army flight school, proposed the implementation of & # 39; Soldier Resilience Services & # 39; and the 3rd Field Transportation Education Team, Park Ji-min, suggested building a soldier search, an army job search site. Park Ji-min said, "We will build a work site on the intranet so that talent can be placed efficiently in accordance with the principles of military demand and supply, such as the social labor market." For units that need talent in each sector, this is a plan to select unit soldiers and receive missions in the form of shipping, and return them to the unit when the mission is complete. "

"If we can mobilize the soldiers we need in the tasks needed by the military, we will improve our efficiency and job satisfaction with our services," he said.

The Army decided to make a policy proposal book from the announcement of these soldiers and distribute it and follow it up so that it could be structured by army policy.

Kim Yong-woo, the army general, said, "The most important assets for the army are people, and the mighty army is the biggest fighting force of the army, and the future and hope of the Republic of Korea." "Young soldiers are young soldiers. I will cultivate them." Union