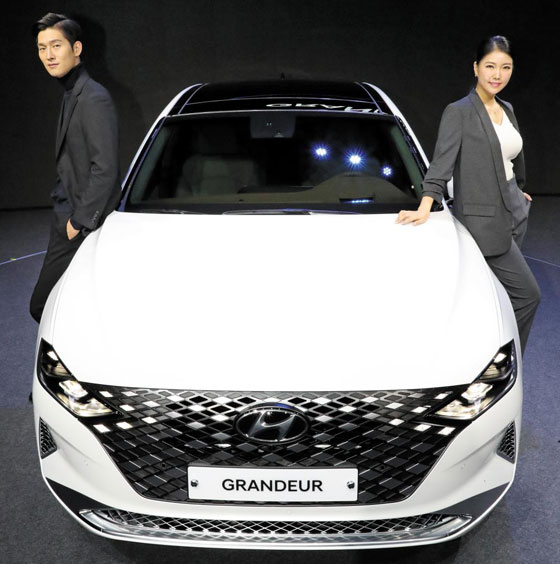 'The New Granger' returned after 3 years
Increase wheelbase, width, etc.! Assistance for air cleaning systems
53% are in their 30s and 40s

Hyundai MotorThe flagship premium sedan Granger is back, bigger and smarter. Hyundai announced on the 19th that they will open the appearance and specifications section of 'The New Granger' from the change model of the Granger section and start selling it. It was a part change model that appeared three years after the release of the 6th generation Granger (IG), but the design was drastically changed and various cutting-edge specifications were applied to change the class of new cars. New Granger also set the best record for all domestic cars, with more than 32,000 pre-sales.
New Granger has a wheelbase of 40mm wider and 10mm wider than its predecessor. With a wheelbase of 2885mm and a width of 1875mm, its interior space is the longest and widest among all the Grandeur. The exterior design has also changed dramatically. The radiator grille, which is the front intake, and the headlamp connected in one. Lee Sang-yeop, head of the Hyundai Motor Design Center, said, "This is the first time Grandeur is the first mass production car in Hyundai that makes several design elements instead of lines."

New Granger is equipped with various advanced specifications developed by Hyundai. The first air cleaning system in a Hyundai vehicle. A fine dust sensor monitors indoor air, while an air filter that can capture 99% of ultrafine dust purifies vehicle air. Filters can be replaced every six months to one year (15,000 km). An intelligent attitude control system, which detects and controls passenger posture, is also equipped with improved performance. After driving for a long time, lumbar support automatically moves in four directions: up, down, left and right, changing shape to reduce back fatigue.

The advanced driver assistance system (ADAS), the initial stage of autonomous driving that drives the development of Hyundai, will also be improved. 'High-Speed ​​Assistance System' (HDA), which allows the steering wheel to keep the distance and lane between cars, previously only available on the highway, but in New Granger, it can also be used on the highway. The total number of domestic roads supported by this system is 6623 km, 40% more than before, and Hyundai plans to keep updating road data.

The New Granger won 32,279 contracts in the initial contract which runs from 4 to 18 April. This is a record number of the largest domestic pre-contracts (2,749 units) held by the 6th generation Grandeur, and the partial change model beats the results of the previous contract. Specifically, 30 ~ 40 pre-contractors accounted for 53%, and the younger age group of consumers looking for Granger was young. Jang Jae-hoon, vice president, said, "It was very successful with the design of various high-tech conveniences for young people."