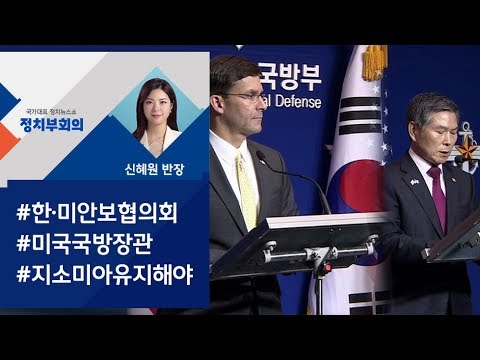 The reason for their meeting in Seoul is to attend the Security Council, which will take turns every year. This year, the issue of the Korea-Japan military information security agreement, Jisomia, a week before the end of the problem, is the biggest problem. On the plane to South Korea, Esper stated, "My message is that Jesomi must remain. Obviously, I will express US concern." A question was asked at a press conference after the meeting. First, Defense Secretary Chung Kyung-Doo said, "This is the basic idea that Jisomia has been maintained," assuming that consultation with Japan is good. Meanwhile, I also asked the United States to try to change Japan's attitude. On the other hand, US Defense Secretary Esper said, "China and North Korea are benefiting from the end of Jisomia or the conflict between Korea and Japan." There is no compelling reason to try to put it back on the right track.

At today's meeting, the United States had pressed Gismia and the 11th defense negotiations were underway. This is known to demand $ 5 billion, almost five times this year's contribution. The two ministers said, "I agree that defense contributions must be decided at a fair and mutually beneficial level, and that the eleventh round of negotiations must be concluded before the tenth agreement ends."

By the way. The United States has not given much pressure or talks with Japan, which has led to a decision to end Jizomia through restrictions on retaliatory exports. If you want to emphasize ROK-US-Japan military cooperation, not only South Korea will be defeated, but even the causal service provider, Japan, must express remorse for the minimum export restrictions. Secretary Esper has been meeting President Moon Jae-in at the Blue House since 4:00. The Blue House reaffirms its stance that there will be no somersault from Jisomia without a change in Japanese attitude.

On the other hand, there is a view that the United States is not biased towards Japan because it suppresses the maintenance of Chisomia. Jisomia is very important to protect US troops in Korea and North Korea from North Korea, which means that Jisomia is sensitive to the lives of Americans. The same applies to the balance of power against North Korea, China and Russia. The US-US commander, Abrams said, "The basic principle of Jisomia is a clear message that the two countries will prioritize stability and security in Northeast Asia rather than historical differences." President Mark Milly said, "North and China will benefit from the end of Gisomia."