Tomoko Yamaguchi Dating Toshiaki Karasawa with folded arms! A bond that hasn’t changed in 25 years of marriage | The woman herself 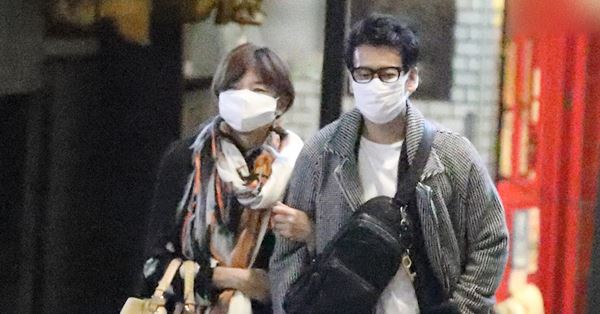 Yamaguchi and Karasawa came home with clenched hands on their birthdays.

A couple walking around downtown Tokyo chatting around 6pm at sunset. Tomoko Yamaguchi (56) and Toshiaki Karasawa (57) are two people who can convey a good friendship even in a mask.

When they finally found the little sushi restaurant they were looking for shuttling back and forth on the same street as if this was their first visit, they passed through the goodwill as if they were sucked in.

“This is an upscale shop that costs less than 30,000 yen per person, and even though it only opened a few years ago, it is already well-known as a popular shop which is difficult to make reservations for. It is a very popular restaurant among foodies.” (Author gourmet)

Several hours later, the two of them left the shop when sent by the landlady. Yamaguchi, who seemed to be having a crush on alcohol, naturally got his arm involved with Karasawa. The two of them disappeared into the city at night while keeping their shoulders close to each other.

“Since we got married, it is a couple’s rule to celebrate their birthdays alone. Mr. Karasawa seems to be choosing the birthday dinner shop every year this time when he hears a request from Mr. Yamaguchi.” acquaintances)

The two married in December 1995 and have shown the same bond 25 years later. In June 2013, the magazine also witnessed a couple going on a date at an Italian restaurant with their arms crossed on Karasawa’s birthday.

We will return to Figs, but it seems we haven’t lost our “newlywed brilliance” yet.

“Several years ago, on a variety program, Mr. Yamaguchi said, ‘I want to live together as much as possible,’ and he still holds hands and sleeps together every day.” (Acquaintance of Mr and Mrs Yamaguchi)

Yamaguchi and Karasawa were beautiful even before the silver wedding ceremony, but if anything, they felt like a minority …

According to a survey conducted by Asahi Kasei Home Products in 2013 for couples aged 30 to 59, the percentage of couples holding hands was 33%. However, Takeshi Tamura, a psychiatrist who is familiar with marital issues, talks about the importance of skinship.

“In Japan, middle aged and older people who have long marriages have less skinship. As they get older, they tend to lose interest in each other and become stronger when they have children. Skinship is a type of communication. I like it. By interacting. with people, you can relieve stress and feel safe, and the relationship between partners will be closer. “

While affirming love through skinship, the life of the Yamaguchi and Karasawa couple will continue.

Commemorating the release of the last 23 volumes of cross-sectional advertisements in the 5 evening national newspapers (Sankei Shimbun) –Yahoo! News