Elisabetta Trenta, the minister's former ministerial home for her husband. At Maio: «Leave it now» 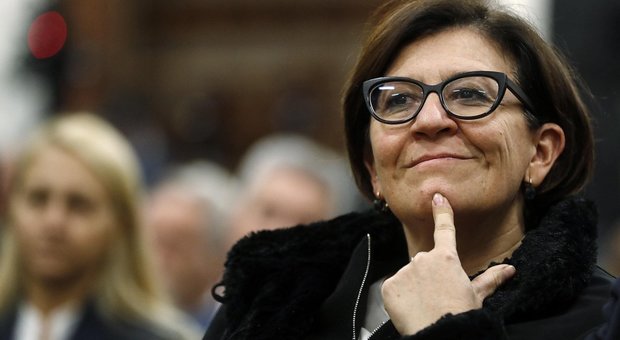 Elisabetta Trenta, a former defense minister in the Yellow-Green executive, was still living in the "official" home assigned to her when she was in government and a political storm soon erupted. Everyone, even the party, Five Star, asked him to leave the apartment. But she kept the point, explaining that the house had been moved to her husband, a military man, who had full rights, in accordance with every regulation.

"I think for sure the husband will be entitled to the inn. But it is appropriate that at this time the minister, after three months of leaving, leaves the house. Then the husband will make a request to get it.
accommodations like all Army officers follow the normal rank. This is the most correct thing to do, "commented the 5 star leader, Luigi Di Maio, talking about the story revealed by Corriere della Sera.

Elisabetta Trenta: «I took it out, I don't deserve it. I fought against Salvini more than others »

Clearly the center-right opposition parties are the most difficult to attack. Maurizio Gasparri draws inspiration from this story to define so many "moralist" pentastellars per kilo of "liars and hypocrites". Also another blue exponent, Licia Ronzulli, talks about "double moral grillina". "They shouted" honesty "but they only thought about occupying seats and, apparently, flat service." accusing senator Forza Italia. "The privilege is' casà for the grillini", is Fratelli's sarcastic commentary on Italy. The Democrats were also annoyed: Senate group leader Andrea Marcucci called on the former minister to clarify "quickly" and announce urgent questions.

Finally, the distance that made the most noise, from the party which, in Stefano Buffagni's voice, asked him
explicitly left the apartment. «I read the news this morning about the former Minister Trenta in the prestigious building assigned to her husband, where he lives. I also read – the deputy minister for economic development shows – the answer from former Minister Trenta: formally it also seems incomprehensible, but this is not a 5 star! We are born with another mission, being in the palace always risks polluting us, changing us, and fighting this "medicine" we must keep our attention high. "I have never been a legal expert – Buffagni continued – and I understand that functional requirements can appear during the mandate. But if he is one of the Democrats or one of the Leagues to give such a husband the house to be kept even after the mandate what shall we say? "

Trenta explained that she did not leave the apartment because the administration itself reassigned it to her husband who, who had a "first class post," had the right to assign "accommodation at the same rate assigned to me.» Go to another, Trenta determine, will add administrative costs, people from deletion by example. "As a minister – he explained – I asked for accommodation services because it was closer to work, as well as appropriate security and confidentiality requirements. Accommodation is assigned to open 2019, following appropriate and necessary administrative procedures, freed by formal assignment orders from the competent office. When I leave the office, I will have, according to regulations, three months to leave the apartment, a term that has not yet ended (ended three months from the new government oath, which is December 5, 2019) ».

"As is well known, my husband is an Italian Army officer – still declaring Trenta – with the rank of major and currently holding a first class position, a position expected from the same level of accommodation assignment." has been assigned to me (actually I have not been given ASIR accommodation – the so-called representative – but first-class ASI accommodation. Therefore, since my husband requested accommodation services, to avoid further financial burdens on administration (for which removal costs, etc.), has been reassigned the same as what was previously given to me, at the request and in accordance with the same procedure as above ". An explanation which however has not convinced 5 stars either.