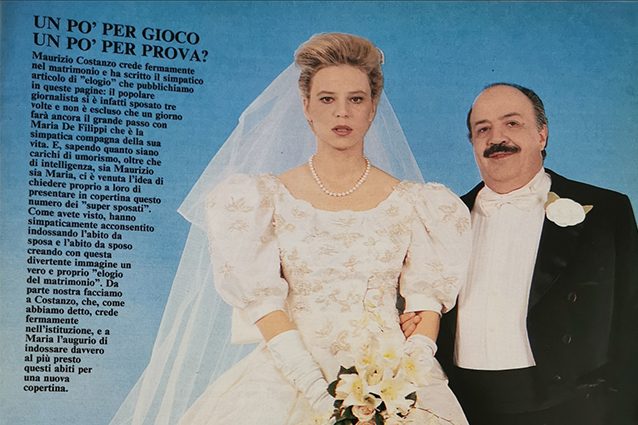 There is a whole story, different from how it is known, behind photo by Maurizio Costanzo and Maria De Filippi portrait like two married bride and groom. Giovanni Ciacci had revealed that the intended shot would be a photomontage wanted by a well-known editor of a newspaper at the time, who did not want to be named. We have taken information and purchased a copy of the original People's Month 1992 where the director, the late Sandro Mayer, would very much want the Italian journalism partner most talked about. posing, in wedding attire.

The reason, however, was not because of their actual marriage, which took place on August 28, 1995, three years later, but a special "Super Married" was scheduled for the March edition. Furthermore, Mayer asked Constantius to sign a joint editorial, titled Praise the marriage, where the reporter can explain, given his three failed marriages, why he still believes in the sacred union between the two individuals and above all how much he wanted him to be with his partner at that time, by his side for two years, Maria De Filippi.

The alleged photo was presented as a real shot

The questionable photo, the photo of Costanzo, a brave groom with white flowers in the hole with a varnished and catatonic De Filippi, accompanying the editorial with a caption possibly written by the same Mayer. In this paragraph, separately titled "A little for fun, a little for exams?", Explained why the newspaper wanted a marriage agreement signed by the famous multi-divorced journalist and why he asked the couple to pose in the wedding dress, without making any reference to that reality a fake:

Maurizio Costanzo believes strongly in marriage and has written great articles about 'praise' what we publish on these pages: the popular journalist has actually been married three times and maybe one day he will still take a big step with Maria De Filippi, who is a good friend of her life. And, knowing how full of humor, as well as intelligence, both Maurizio and Maria, we came up with the idea of ​​asking them to present the "super married" problem on the cover. As you have seen, they generously agreed to wear a wedding dress and groom's suit, creating a real wedding speech with these funny pictures. For our part, we do for Costanzo who, as we have said, believes strongly in the institution, and Maria's desire to wear these clothes for new coverings soon.

It was March 1992 when these words marked what would be the "case" of the 3.0 era, which is still unthinkable, studded with a number of mistakes and inaccuracies. In a balanced way, what Ciacci stated was a photomontage, not presented as such on the first page of Gente Mese; the belief that it was a service released at the same time as their marriage was totally unfounded, for at least three years before; and finally, the will of Maurizio Costanzo and Maria De Filippi to show themselves as on the day the alleged marriage had taken place, was created from the beginning, because everything was born, from the beginning, as furniture, or posing photographic services, needed by Sandro Mayer for one specifically for weddings to be included in Rusconi publisher's popular monthly magazine.

Editorial Costanzo is a statement of love

And the final editorial words by Maurizio Costanzo have no other purpose than to throw a strong base, in public, about what his story with Maria De Filippi is 'good' for two years (the two met in 1990), explained the desire to realize with him a life project which, in fact, a few years later, would bring them to Campidoglio in the presence of their extraordinary officer, who then Rome Mayor Francesco Rutelli. Thus the journalist closes the speech for marriage, presented on the front page with the motto ‘getting married is beautiful& # 39 ;:

To return to personal, I would say that even though three marriages have not been successful, I have not cultivated a grudge against the lives of two or two, but I have become a paladin, with the belief that one cannot. In fact, I remember my single period as a season of madness and melancholy: the first cannot be justified, the second is justified. I will always bet day after day in my current history, on days in my current history, with a strong hope that it will finally take the right path.