Home / italy / Alliance in the middle with Salvini? Renzi: "For me, there is no opening"

Alliance in the middle with Salvini? Renzi: "For me, there is no opening" 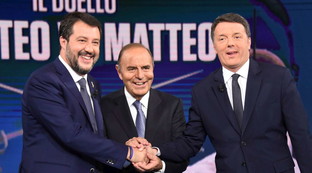 Sentences spoken by Renzi "In two and a half years, three years I bet that the real challenge is not on extremism but in the middle" and "Salvini will move to the center and will find them alive Italy". These are the words spoken by Italian senator Viva during registration. And for the question in the studio if Italy has to prepare an alliance with Salvini in the middle: "Don't ever say, I really think that seeing a Vespa with popcorn is worth the price of the ticket".

"On the hypocrite in ius culturae" "I – then Renzi claims – are the people who bring Pd up to 40%, which has never existed, to 18% and to 16% there are DS". And then, talk about ius culturae and the proposal of dem secretary Nicola Zingaretti. emphasizing "I feel hypocritical to propose laws that don't yet have the power to do when there are numbers".

"ArcelorMittal, I'm not accusing Patuanelli" Regarding the question of former Ilva and why he chose with the Italian Viva amendment to remove the criminal shield from the company, Renzi stated: "I don't feel like throwing a cross at poor Patuanelli, we should stop being ArcelorMittal's defense attorney. The company has chosen to close Taranto, on 2017 someone pointed out that their project was worse than Jindal, but to save them was valued the worst project. "