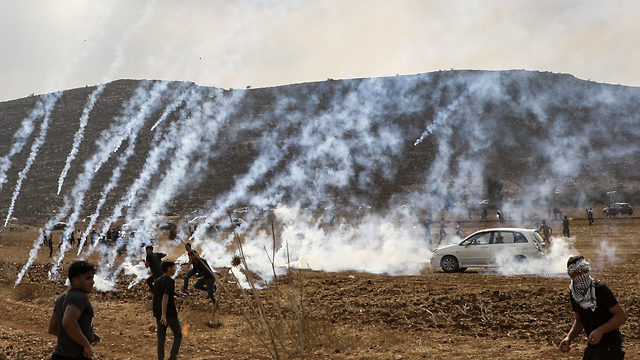 The Palestinian Authority's Foreign Ministry claims that Israel is planning to confirm some 700 dunams, or some 170 acres, of land from the village of Qaryut, near the West Bank city of Nablus, as part of a plan to expand a bloc of settlements. In a press release, the ministry condemned the plan.

Tear gas fired by IDF troops falls among Palestinians protesting the construction of an outpost near the West Bank settlement of Shiloh, Oct. 17, 2019 (Photo: Getty Images)

"We have always warned of the seriousness of the Israeli colonial settlement plan that targets the southwestern area of ​​Nablus and aims to establish a huge settlement bloc that will be connected to other settlement blocs," the press release said.

The Israeli Coordinator of Government Activities in the Territories (COGAT) would not comment on the matter, while the two leading Israeli settlement watchdog groups said they knew nothing of the plan.

However, Firas Alami, a lawyer from Yesh Din, an Israeli human rights organization representing the Qaryut villagers, told The Media Line that since last week, they have been barred from about 700 dunums of village land.

The land is in Area B, which is under PA administrative control and where Palestinians do not need Israeli permits or coordination to enter.

"When I reached the Israeli authorities, they informed me that the land had been declared a closed military zone by the army for security reasons," Natural said.

Such actions rarely, if ever happen in Area B except in acute emergency situations.

"It's a huge, dangerous step," he said. "It's an Israeli government step to slowly annex the land."

Experience stressed that the land has olive trees and it is the beginning of the harvest season.

The West Bank settlement of Shiloh

Bashar Qaryuti, an activist from the village, said it was mostly a show of power.

"What happened is not the confiscation of land, but the imposition of control," he said. "We were shocked that we weren't able to enter these lands."

Qaryuti said that most of the land is situated between three existing settlements.

Mohammed Elias, a legal adviser to the PA, said that "the lands of Qaryut village and the southwestern area of ​​Nablus are being targeted by a big settlement bloc named Shiloh for expansion. It is an attempt to divide the West Bank. "

Elias claimed that "Palestinian lands are being confiscated from citizens by force in some cases, and by military orders in other cases, to support Israel's colonial plan and make it a reality. We are talking about very serious violations. "

Elias added that residents of the West Bank had previously turned to Israeli courts over land confiscations.

"In some cases, Palestinians have achieved legal progress. But when such cases happen, weeks later we hear about a new Israeli law that will prevent similar achievements, "he said.

"The Israeli judiciary is an occupation proxy. Popular resistance, "he said," is what is left to the Palestinians to confront the Israeli settlement threat. "

Omar Abdullah, a senior official at the PA's Foreign Ministry, said that "the danger now is that Israel is no longer an occupying power, but a colonial power that uses all of its resources to deport the indigenous people from their land in order to seize it. "

Abdullah called on the international community to note Israel's activities in the West Bank.

"What Israel is doing is colonialism, using illegal procedures that are destroying any hope for a two-state solution," he said, adding that the world should "limit" Israeli "violations" and that Israel should "work within the parameters of international agreements "with the PA.

"When the international community and the UN relinquish their political and legal responsibilities, world order loses credibility," he said.

Negotiations between Israel and the Palestinians over the future of the West Bank have long been at a standstill, and Gad Shimron, an Israeli commentator and former Mossad agent, blames this, for the most part, on the Palestinians.

"They refuse to think of opening a channel of communication with the Israelis," Shimron said.

"There is no doubt that the right-wing government (of Israel) is systematically expanding settlements, but the Palestinian refusal to even think of negotiations only plays to Bibi's favor," he said, using the nickname of Prime Minister Benjamin Netanyahu.

"The Palestinian Authority has come up with a realistic proposal," he said.

"Remember what was offered (to the Palestinians) 11 years ago," he said, referring to a peace plan proposed by then-prime minister Ehud Olmert. "Abu Mazen (Palestinian President Mahmoud Abbas) didn't even bother to reply."

Shimron added that "crying and protesting" will bring the Palestinians nothing.

"They should initiate, come up with new ideas," he said. "Crying constantly, as a policy, has failed completely."

Article written by Dima Abumaria. Reprinted with permission from The Media Line