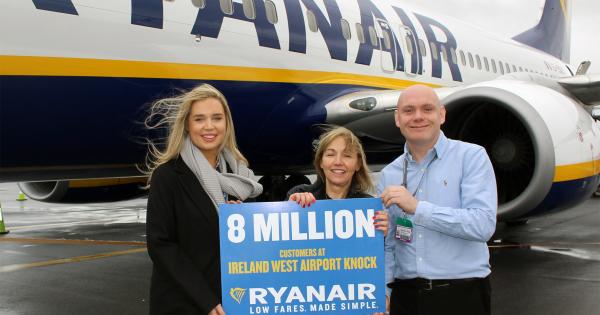 A woman from Ballaghadereen is 8 million Ryanair passengers to go through West Ireland Airport.

Last Friday, Irene Brady of Ballaghaderreen, Co Roscommon, who traveled to Liverpool was the 8th millionth lucky Ryanair passenger and to mark the occasion presented with a pair of flights back to Ryanair's latest destination, Cologne, from West Ireland Airport.

Because Ryanair's first flight from the airport left for London Luton in December 1986 they continued to develop their route network from the airport and today also launched the 2019 summer schedule which will offer customers in the West and North West a choice of 13 routes to the UK and Europe, giving more of 600,000 passengers with 46 flights every week.

The 2019 schedule will include for the first time twice a week's new service to Cologne which starts in June 2019 and will provide a major tourism boost for the Western region. Other highlights of the 2019 schedule include

Robin Kiely, Ryanair said, "Ryanair is also happy to celebrate its 8 million customers since it began operating from the West of Ireland airport in 1986. Over the past 32 years, Ryanair has seen huge demand for routes in West Ireland Airport".

Joe Gilmore, Managing Director, West Ireland Airport added "" We are pleased to reach another landmark in the history and growth of the airport with Ryanair in welcoming their 8 million passengers to use the airport. I would like to acknowledge the loyalty and commitment that Ryanair has shown to the airport and West Ireland for the past 32 years by providing very important international access to the UK and Europe. "