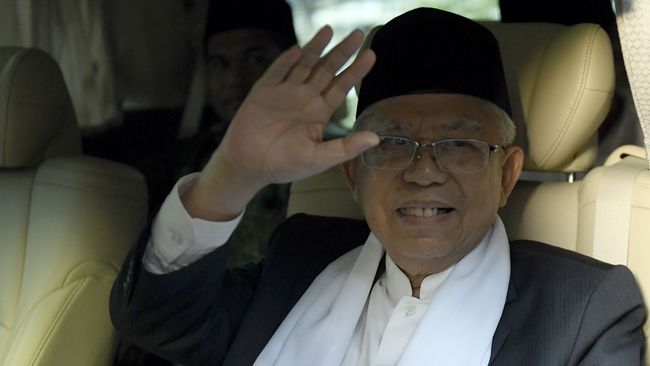 Nevertheless, the MUI Chairperson said that apologies could be delivered, but all of them returned to Boyolali residents as those who did not accept the joke.

"I think it's up to the community, yes," Ma'ruf said when met at the Mercure Hotel, Ancol, North Jakarta, Thursday (8/11).

The man who is also the Chair of the Indonesian Ulema Council (MUI) said that Boyolali residents did not necessarily forgive Prabowo. "Sometimes I have apologized, but how about the community, right with Boyolali," he said.

Previously, Prabowo apologized for the 'Boyolali look' joke he made when he inaugurated the Office of the Prabowo Sandi Winning Body on October 30, 2018. The apology was carried out in a video uploaded by the Spokesman Prabowo-Sandiaga, Dahnil Anzar Simanjuntak .

Apologies were made after thousands of Boyolali residents took to the streets demanding that Prabowo apologize for the joke.

National Campaigner Joko Widodo-Ma'ruf Amin, Inas Nasrullah Zubir assessed the apology made by presidential candidate number 2 Prabowo Subianto in relation to the statement 'Boyolali looks' with political nuances. He saw the apology not from Prabowo's deepest conscience to admit his mistake.

"It is not an apology that comes from his conscience, but a political apology, because the apology was done after calculating the advantages and disadvantages," Inas said Wednesday (11/7).

Inas, who is also a Hanura Party politician, then brought back a number of other Prabowo statements that were controversial. Inas noted that Prabowo once quipped journalists with the phrase 'can be bribed' and 'can't shop at the mall'. In addition, he also noted that Prabowo once insinuated 'the Indonesian nation was naive and ignorant' and the statement 'the Jakarta elite was all thieves'.
"His statements which are insulting and harassing repeatedly occur, this has become his habit [kebiasaannya] Prabowo, "he said.

Meanwhile, the President of the Indonesian incumbent Joko Widodo (Jokowi) was giggled when mentioned about the 'Look of Boyolali'. Initially, Jokowi seemed to not hear the question about Boyolali jokes because of the noise in the place of direction to the Hanura Party legislative candidates at Discovery Ancol Hotel, Jakarta, Wednesday (7/11) night.

However, he only laughed when he heard the question for the umpteenth time. Jokowi giggled while walking away from the location. (dhf / ain)