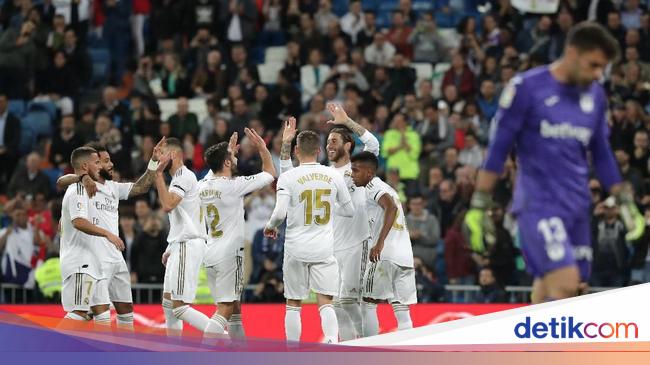 Madrid – Real Madrid beat Leganes 5-0 in the continued Spanish League competition. The victory made Los Blancos back to stick to Barcelona in the LaLiga standings.

Compete at the Santiago Bernabeu on Thursday (10/31/2019), Madrid immediately ahead since the 7th minute. Rodrygo opened the host advantage. Sodod got Karim Benzema, kicking the Brazilian player into the Leganes goal.

A minute later, Madrid's superiority immediately increased. This time Toni Kroos who broke down the goalkeeper Leganes elwat right foot kick from the right side of the penalty box. The ball sank into the lower right corner of the goal Leganes. The score becomes 2-0.

Madrid can add goals through in the 24th minute. Juan Soriano had violated Eden Hazard in the penalty box, the penalty obtained by the host.

Sergio Ramos advanced to become the executor. His shot was blocked, but VAR decided to repeat the shot as the Leganes goalkeeper advanced from the goal line. In his second experiment, Ramos could hit the ball into the goal. The score becomes 3-0.

In the remaining time of the first half, Madrid had several opportunities through Benzema and Rodrygo, but there were no additional goals until halftime.

In the second half, Madrid could score the fourth goal in the 69th minute. Again, through a penalty after Kenneth Omeruo violated Luka Modric, Benzema this time went on to become the executor and fulfill his duties well. The score becomes 4-0.

Left behind four goals, Leganes still trying to pressure Madrid. Several opportunities were obtained through Youssef En-Nesyri and Jonathan Silva, but none of them scored.

In fact Madrid can score his fifth goal. Luka Jovic followed his name on the scoreboard in the 90th minute +1, and made sure Madrid won 5-0.

These results make Madrid return to second place in the Spanish League standings with 21 points, behind Barcelona with one point adrift. The Leganes still fall at the bottom of the standings.