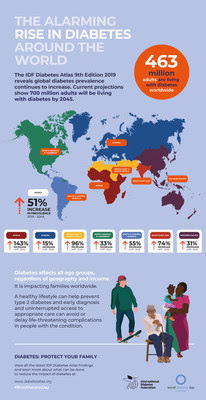 The International Diabetes Federation launches the 9th Edition of Diabetes Diabetes IDF to commemorate World Diabetes Day, November 14, 2019, with statistics One in eleven adults living with diabetes, emphasizes the importance of diabetes prevention, control and management.

On World Diabetes Day, the International Diabetes Federation (IDF) released new figures highlighting the alarming growth in the prevalence of diabetes worldwide. 38 million more adults are now estimated to be living with diabetes compared to results published in 2017. The new findings, published today at 9th The Diabetes Atlas IDF edition, shows that there are now 463 million adults with diabetes worldwide

The latest Atlas reports that the global prevalence of diabetes has reached 9.3%, with more than half (50.1%) of adults undiagnosed. Type 2 diabetes accounts for about 90% of all diabetics.

An increasing number of people with type 2 diabetes are driven by complex interactions of socio-economic, demographic, environmental and genetic factors. The main contributors include urbanization, an aging population, decreased levels of physical activity and increased rates of overweight and obesity. For unknown reasons, type 1 diabetes also increases.

"Diabetes is a serious global health problem that has enormous socio-economic impacts that cannot be ignored," said IDF President, Professor Nam H. Cho. "The increasing prevalence of diabetes is a real cause of concern, especially when we consider the high number of people who remain undiagnosed. We must do more to prevent type 2 diabetes, diagnose all forms of diabetes early and prevent complications. We must also ensure that everyone with diabetes have affordable and uninterrupted access to the care they need. "

Diabetes has an impact on all age groups, regardless of geography and income. More than 1.1 million children and adolescents under 20 years live with type 1 diabetes, while three out of every four people with diabetes (352 million) are of working age (20-64 years). One in five people over 65 have diabetes. Increased prevalence puts pressure on the country's capacity to guarantee regular and affordable access to essential medicines and appropriate care. This makes it difficult for many people to manage their diabetes, putting their health at serious risk.

When their diabetes is not detected or adequately supported, diabetics are at risk of experiencing serious and life-threatening complications, such as heart attacks, strokes, kidney failure, blindness, and lower limb amputations. This results in decreased quality of life and higher health care costs and puts undue pressure on families.

"The IDF Diabetes Atlas provides information for those who must make decisions about diabetes care and prevention and for those who seek to influence that decision," said IDF's Atlas Diabetes Committee Chair, Professor Rhys Williams. "A number of studies and new evidence have been collected for 9th edition. We have seen an increase in the number of domestic studies that support our estimates and projections, as we strive to inform the diabetes community and the wider community about the prevalence of conditions throughout the world ".

Much can be done to reduce the effects of diabetes. Evidence shows that type 2 diabetes can often be prevented, while early diagnosis and access to appropriate treatment for all types of diabetes can avoid or delay complications in people living with the condition.