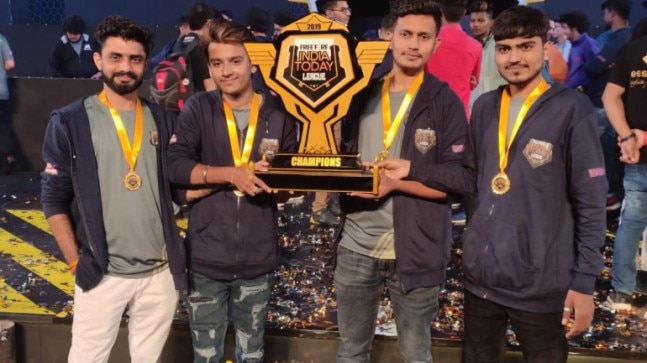 Team Nawabzade won the Free Fire India Today League grand finale on Saturday to take home a whopping price of Rs 8.5 Lakhs. They will next represent India in a global tournament called the Free Fire World Series that will be held in Brazil in November.

After some rigrous e-gaming that ran through 8 maps, the Nawabzade team emerged winner with a maximum number of points (2235 points) from the 12 teams and 48 players that participated in the Free Fire India Today League.

Nightmare finished 1st runners-up with 2060 points while Namooney took the 3rd position with 1085 points. The 2nd, 3rd and 4th-placed teams will get Rs 4 Lakhs, Rs 2 Lakhs and Rs 1 Lakhs, respectively.

Incidentally, Nawabzade finished on top despite securing 0 kills in the first and the last series. The tactic of one of Nawabzade's players talking to water in the final series backfired. They finished 9th in the final series, helping build tension at the Siri Fort. However, they held on to the winning lead thanks to some fine performances in the previous series.

Team Namooney were the first team to claim Booyah in Map 1 (Bermuda) with 10 total kills and 500 points whereas Team Nawabzade got second Booyah on Map 2 (Purgatory) with 560 points and a total of 13 kills.

Team Nawabzade got the second Booyah on Map 2 (Purgatory) with 560 points and a total of 13 kills followed by Namooney, Nightmare, Hawk's, No Mercy, Mossaad, Kingz God, Royal Beasts, Valerian, WAG, Thugs of India and Punisher YT .

Team Nawabzade took their second Booyah in Map 6 with 19 kills and 580 points while Team No Mercy won their first Booyah in Map 7.

"The launch of the Free Fire India Today League … I can clearly foresee the shape it will attain in a few months. The staggering prize money in Brazil … the fact that this game can generate so much money … Our players are going to become rich also. My best wishes to the entire team and all the best for your game. I complement the India Today Group for the initiative. As Sports Minister, I am there with you, "Rijiju said at the event.

Get real-time alerts and all the news on your phone with the all-new India Today app. Download from