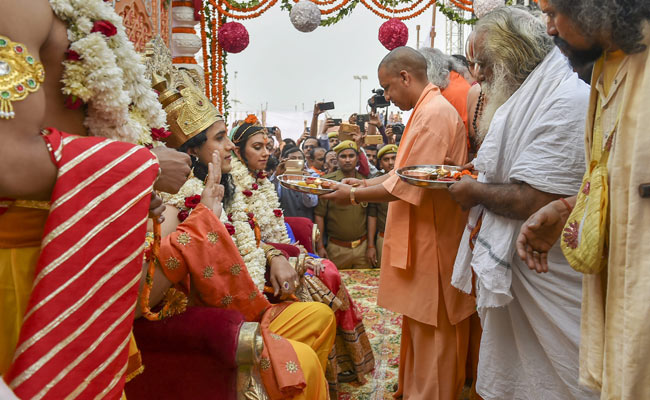 Ayodhya will get a Lord Ram statue that will be part of his identity, Uttar Pradesh Chief Minister Yogi Adityanath said in the morning of Diwali, confirming last year's announcement. However, there is no new detail awaited by the right-wing group.

"There will be a Lord Ram statue here that will become a tourist attraction. Special things will be decided according to the land," said Yogi Adityanath in Ayodhya, where he went for the Diwali celebration last night.

"The statue will be placed inside the room inside a temple. The statue will become a large statue and it will be a sign for Ayodhya," the Chief Minister added in an indication that this would be another mega project such as the Sardar Patel statue in Gujarat.

Regarding the temple planned on the disputed Ramjanmabhoomi site, Yogi Adityanath said, "The temple is here and will be here but whatever happens will be in the parameters of the Constitution".

The government of Uttar Pradesh has announced its intention to build a landmark statue of Lord Ram last year, but there has been no progress since. The government has not yet acquired land for the statue, which will be built through mass partial funding.

The buzz of the statue began with the new demands for a Ram temple in Ayodhya.

The Chief Minister, who was expected to make the announcement yesterday, in the grand finale of the three-day Diwali festival in Ayodhya, however, missed the problem. Instead, he talked about development in the city of temples, underlining that the government would build airports and medical colleges there.