LIVE Maharashtra Government Formation: There seems to be no end in sight in the power struggle in Maharashtra when Shiv Sena on Thursday denied that they had softened their position at the request of the BJP for "50-50" power sharing in the state, with the party saying no rush. hurry to form a government. Sena Chair Uddhav Thackeray, who spoke with his MLA, said the party was still in talks with Congress and the NCP and he wanted "Shiv Sainik to be Maharashtra's chief minister". "We asked what was done to us. We already understand them [BJP’s] problems before the election but I want to run my party too, "he said.

"I will not talk to them until they have clarity about what is done. "If chief minister Devendra Fadnavis says he doesn't know what Amit Shah and he are doing, he must get clarity first," he added.

No Talks About Formation of Government: Aditya |However, Aditya Thackeray said that he would not talk about forming a government. Instead, Shiv Sena Uddhav Thackeray's head will hold a discussion about it, said Aditya.

Shiv Sena MLA Aditya Thackeray said that the delegation met with the Governor to ask him to provide financial assistance for losses faced by farmers given the drought situation. "We have asked the Governor that whatever the losses suffered by farmers, the government must try to help them. Our priority is to help people," Thackeray said.

The meeting between Shiv Sena's delegation and the Governor was over.

Sena Delegation Meets Guv | Seeking immediate financial assistance for rain-stricken farmers, a Shiv Sena delegation, including MLA Aditya Thackeray, met with Maharashtra Governor Bhagat Singh Koshyari at Raj Bhavan in Mumbai. The meeting took place when Shiv Sena was trapped in a power dispute with the BJP allies. Previously, Sena's leaders had hinted that the formation of the government would also be discussed with the Governor.

Aditya Thackeray arrived at Raj Bhawan with other party leaders. 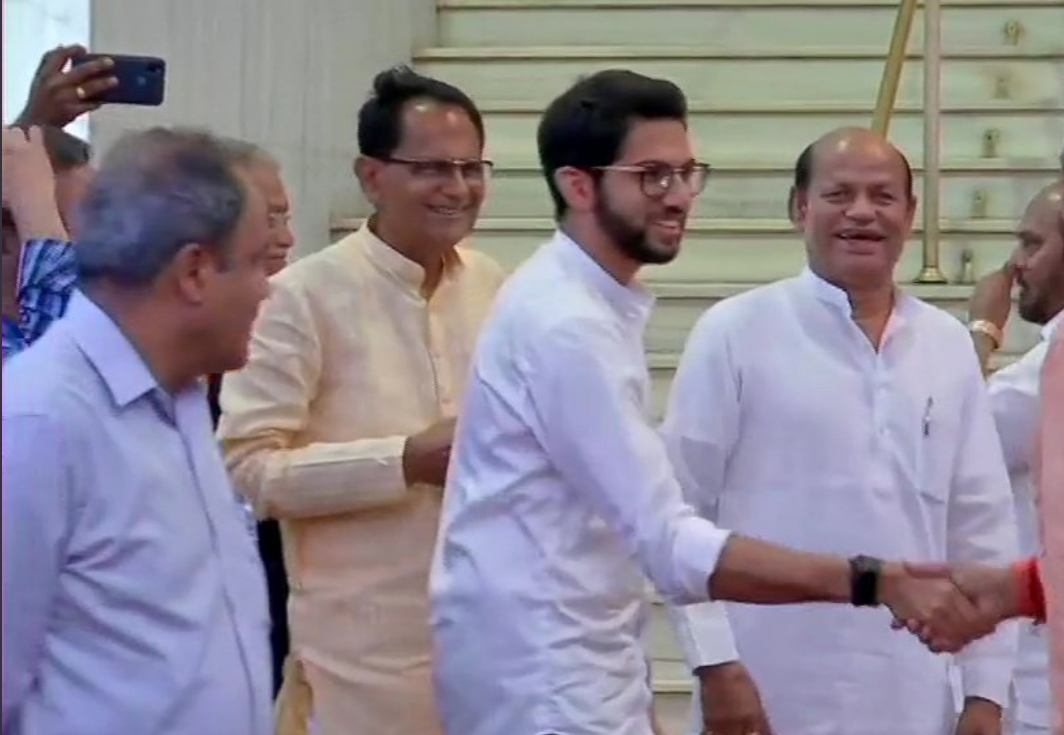 Aditya Thackeray has arrived at Raj Bhawan where Shiv Sena's leaders will meet with the Governor soon.

The meeting between Shiv Sena and the Governor will begin soon. All 63 MLAs are expected to attend the meeting, according to sources.

Chief Shiv Sena Uddhav Thackeray has expressed 'disappointment' on the statement of the chief minister Devendra Fadnvais 'that the BJP did not promise the formula' fifty-fifty 'for the distribution of power in Maharashtra, said several sources. Sources said that the head of Sena, who was present at the meeting, expressed his disappointment at Fadnavis's comment that no fifty-fifty formula – indicating the same division of power – was promised to Sena.

Although there is no agreement in sight, BJP believes it will breakthrough in a deadlock this weekend. The party has even begun preparations for a massive inauguration ceremony at the Wankhede stadium which is likely to be held on November 4 or 5.

Shiv Sena will meet with the Governor at 6:15 pm when power disputes with the BJP in Maharashtra escalate. Sena leader Sanjay Rathod said the formation of the government would be discussed at the meeting.

Maharashtra history shows that it never bowed down before the "throne of Delhi," said a large banner that was posted outside the Nationalist Congress Party's office when the newly elected party, MLA, met. "History shows that Maharashtra does not bow down before the throne of Delhi," he said. That echoes the statement made by the party supremo Sharad Pawar when the Directorate of Enforcement mentioned it in the money laundering case in September. Read the full story here.

With Shiv Sena seemingly opposed to his stance at alliance negotiations, the BJP could offer a dozen portfolios to the party led by Uddhav Thackeray, but would likely deny it as the main ministry, sources told CNN-News18. After making a difficult bargain for one week since the election results, Sena softened her stance on Wednesday, with party leader Sanjay Raut saying it was important to remain with the BJP-led alliance.

Thackeray Disappointed Over Fadnavis's Comments | Chief Shiv Sena Uddhav Thackeray expressed 'disappointment' on the statement of CM Devendra Fadnvis that BJP does not promise the formula 'fifty-fifty' for power sharing in Maharashtra, sources said. Thackeray also stressed that he intended to gain a greater share of power in the alliance government compared to the 2014 arrangement.

Who is Eknath Shinde? | The newly elected Shiv Sena MLA elects senior leader Eknath Shinde as leader of the party's legislative wing. Shinde, MLA from neighboring Thane, was the house leader in the previous period as well, besides being a cabinet minister in the BJP-Sena government. Sunil Prabhu was elected as the party head whip in Jakarta
Maharashtra legislature. 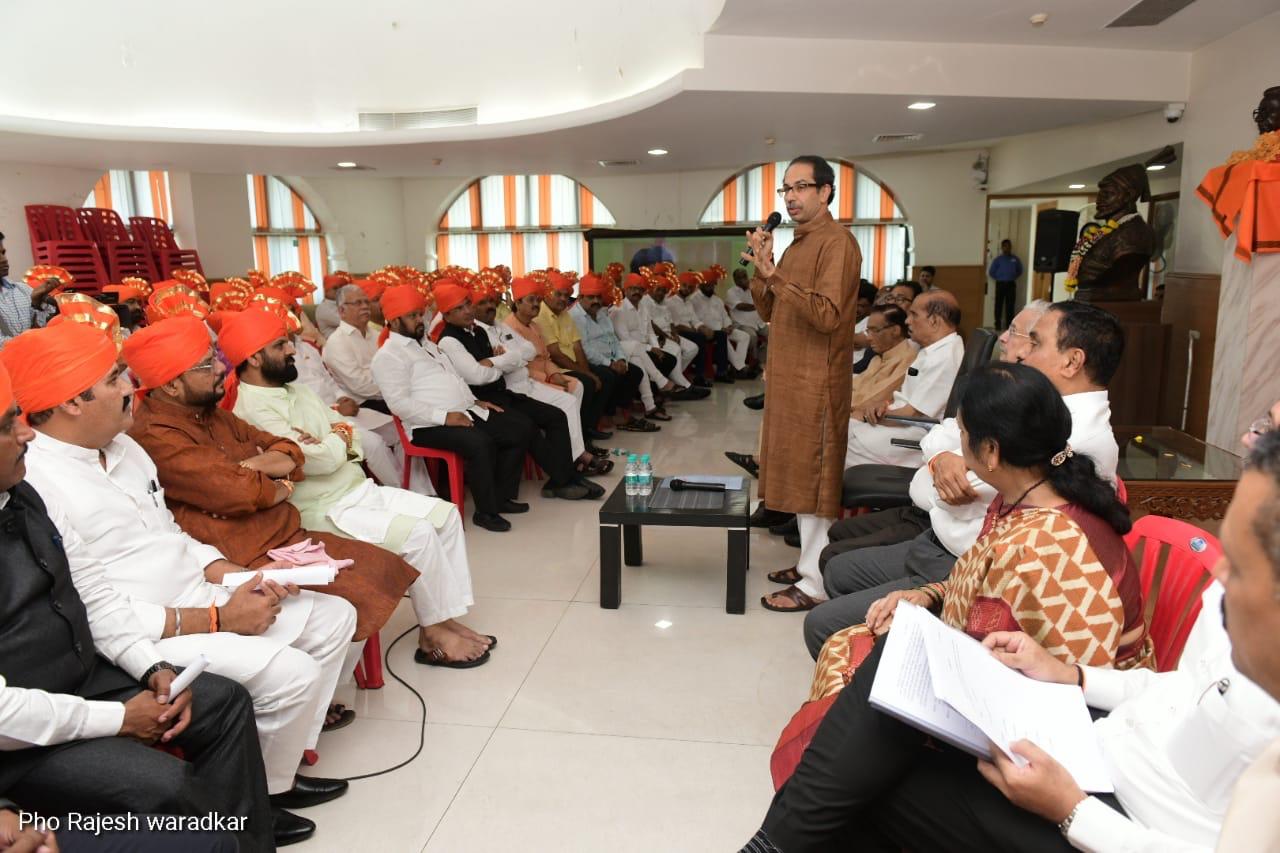 Congress Leader Meets Sharad Pawar | While BJP-Shiv Sena is in a constant struggle over power sharing, Maharashtra Congress leaders have met NCP leader Sharad Pawar, the source said. Chairman of the State Congress, Balasaheb Thorat and former chief ministers Ashok Chavan and Prithviraj Chavan were among those who visited the Pawar residence.

'No Hurry to Form a Government' |Uddhav Thackeray said that he was in no hurry to form a government in Maharashtra. He said this in a conversation with the MLA party. Uddhav Thackeray also asked MLA if anyone was in a hurry to be in government.

Who will be at the Shiv Sena Delegation? | The delegation included Aditya Thackeray, senior party leader Eknath Shinde and Subhash Desai. The delegation was supposed to meet with Governor Bhagat Singh Koshyari at Raj Bhavan at 3:30 pm.

What is the meeting between the Governor and Shiv Sena? | Shiv Sena leaders including Aditya Thackeray, Eknath Shinde, Diwakar Raote and Subhash Desai to meet with Maharashtra Governor Bhagat Singh Koshyari today at 3.30 pm. The delegation will ask for immediate financial assistance for farmers affected by the rain too quickly, he added.

Shiv Sena MLA has chosen senior leader Eknath Shinde as leader of the party's legislative wing. Sunil Prabhu was elected as the party's head whip in the Maharashtra legislature today.

Devendra Fadnavis said that he would rule Maharashtra for the next three years.

For the past 5 years, I have worked as a sevak of Chhatrapati Shivaji Maharaj & will continue to do so for the next 5 years.
The constitution given by BharatRatna Dr. Babasaheb Ambedkar such as Geeta, Bible & Quran for us.
Will reach until the last person with the basic principles of our great constitution! pic.twitter.com/7Czte0zmUL

Congress Denies Aligning with Shiv Sena, But … | Congress ruled out the possibility of allying with Shiv Sena in forming the next government in Maharashtra. However, former CM and senior leader Prithviraj Chavan have said that Congress will "consider" every "concrete proposal" about forming a government with Sena. Read more

The results of the poll of the assembly announced last Thursday made BJP-Shiv Sena pass the 145 mark of the formation of the government. It's been a week, but both parties have fought about CM candidates in the state.

In the midst of the ongoing upheaval between the BJP and Shiv Sena regarding power sharing in Maharashtra, Devendra Fadnavis was positive about the formation of government in the state.

Why is Shiv Sena 'angry'? | Shiv Sena has tried to take a bigger piece of cake, reminding BJP of the "50-50" power-sharing agreement that arrived before the election. However, Fadnavis denied that such an agreement had been reached and stressed that he could continue as chief minister. This angered Sena, who canceled talks with the BJP.

BJP Supports Devendra Fadnavis for the Second Term | The BJP has chosen Devendra Fadnavis as the leader of his legislative party, essentially handing over Maharashtra control to him for a second term as CM. While Shiv Sena demanded the head of the rotation department.