An old puzzle about the atmosphere of the Sun is solved 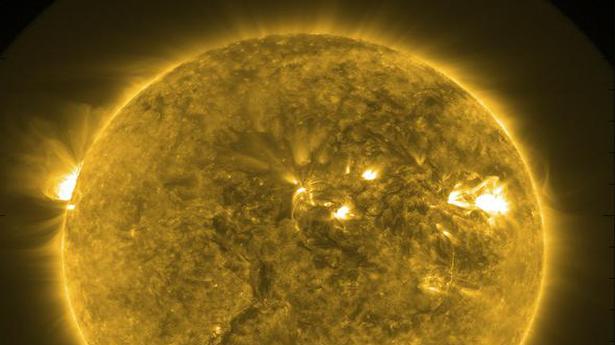 The sun is one of the best known celestial bodies – it is in the sky every day. However, he saved a lot of puzzles for solar physicists. One puzzle concerns the surface and temperature of the atmosphere. An international research team including one at the Indian Institute of Astrophysics, Bengaluru, has answered this question. These observations may have revealed why the Sun's atmosphere is hotter than its surface.

The temperature in the Sun's core is almost 15 million degrees Celsius, while in the surface layer, known as photospheres, it is only 5,700 degrees C. The expected natural thing is that which is still farther out, in its atmosphere, known as corona, the temperature will be proportional to the on the surface (photosphere). However, the corona's temperature is much higher. It starts to increase outside photosphere, reaching a value of around a million degrees or more in the corona.

People will think that because there is no additional heat source, when you move away from a hot object, the temperature continues to decrease. However, with respect to the Sun, after falling to low temperatures, its temperature rose again to one million degrees in the corona which stretches more than a few million kilometers from the surface of the Sun. This means that there must be a source that heats the corona. The coronal heating puzzle has been dealt with by many theories. Now, in a paper published in Science, the team of solar physicists has made observations and matched them with analyzes that explain this puzzle.

Spicules on the Sun.

The key to this puzzle lies in jets like geysers known as solar spicules which originate from the corona and photosphere interfaces. While this photo looks like a small projection like a hair, they are actually 200-500 kilometers wide and soaring to a height of about 5,000 km above the surface of the sun.

It has been suspected that these spicules act as channels through which the mass and energy of the lower atmosphere cut through the photosphere and reach the corona. This research, led by Tanmoy Samanta and Hui Tian from Peking University, China, has described how these spicules are formed and also shows that they act as channels through which hot plasma is carried into the corona region.

"Our observations show that these spicules heat up as they travel upward, reaching coronal temperatures. They are made of plasma – a mixture of positive ions and negatively charged electrons, "Dr. Samanta said. Objects at different temperatures emit light with different wavelengths. "Coronal plasma emits light in extreme ultraviolet. We found an increase in coronal intensity (emission) when the spicules spread upwards, "he explained.

The team made observations using the 1.6 meter Goode Solar Telescope at the Big Bear Solar Observatory (BBSO), the largest solar telescope in the world, with NIRIS instruments. "This is a high-precision instrument and can measure magnetic fields with high sensitivity," said Dipankar Banerjee, from the Indian Institute of Astrophysics and one of the authors of this paper. The researchers also matched these observations with simultaneous observations from the Atmospheric Imaging Assembly at NASA's Solar Dynamic Observatory rides.

This research involves taking many high spatial resolution images from the same region of the Sun in a short amount of time. This is known as high cadence. "Because spicules have a very short life span – ranging from 10 to 100 seconds – to understand their dynamics, we need a higher rhythm. This is also a limiting factor of many solar telescopes, "said Dr. Samanta.

The key finding is that spicule bursts originate from tissue boundaries such as magnetic tissue structures on the surface. Near the point of their feet, a magnetic element appears which has the opposite polarity of the existing magnetic tissue. When structures with opposite polarity meet each other, they cancel. This is seen at the point of the feet of some spicules. "Right at the time of the cancellation, we discovered the presence of spicules, which are also responsible for heating the upper atmosphere," said Dr. Samanta, explaining how the spicules originated according to their observations.

You have reached the limit for free articles this month.

Register for The Hindu for free and get unlimited access for 30 days.

Find the mobile-friendly version of today's newspaper in one easy-to-read list.

Enjoy reading as many articles as you want without limitations.

List of selected articles that suits your interests and tastes.

Move smoothly between articles when our page loads instantly.

A department store to see the latest updates, and manage your preferences.

We let you know the latest and most important developments, three times a day.

* Our Digital Subscription Package does not currently include e-paper, crosswords, iPhones, iPad mobile applications and printouts. Our package enhances your reading experience.